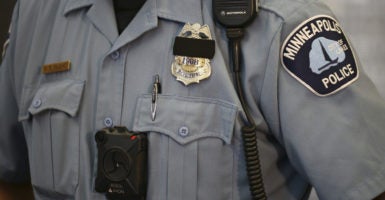 The Salt Lake City Police Association last week criticized the city’s handling of misconduct investigations for officers involved in the widely publicized arrest of a hospital nurse who properly refused to allow a warrantless blood drawing on an unconscious patient.

In a letter addressed to Salt Lake City Mayor Jackie Biskupski and Police Chief Mike Brown, the union specifically denounced what it called the “premature release of body cam footage,” which it claimed “corrupted” the investigations of two Salt Lake City officers.

Given that police unions are often the most vocal opponents of body camera use in general, it is hardly surprising the Salt Lake City Police Association is less than thrilled with the video’s release. What is surprising, however, is the association’s decision to argue about body cameras in this particular case.

The video to which the union refers went viral early in September and documented the July 26 actions of police Detective Jeff Payne and Lt. James Tracey as they responded to another department’s request to collect blood from a traffic crash victim.

Wubbels and her attorney obtained the body camera recording through a public records request and made it available to the public on Aug. 31. Although the union remained silent in the immediate aftermath of its release, it has now condemned the city for allowing the untrained public “to make what often amounts to biased and ill-informed judgments of the police.”

There are sometimes legitimate concerns with releasing body camera footage to the public.

It is well documented that the use of police body cameras can substantially improve relations with the public and even protect officers from false accusations. That is not to say the use of body cameras and the public release of footage are always without genuine concern.

As the Salt Lake City Police Association’s letter indicates, there may be times when the actions recorded in a video will likely lead to criminal charges against an officer, making the footage evidence for trial purposes.

Releasing this evidence to the public could taint a potential jury pool or lead to other serious procedural concerns for the prosecution. Media or social backlash against the video might realistically lead to concerns of due process for the accused officer.

It is true that law enforcement officers may find themselves demoralized by the “ill-informed judgments” of a public that too often second-guesses the gut reactions made in life-or-death scenarios.

There are also a number of legitimate privacy concerns that might arise in some circumstances where body camera footage is released. The videos often capture bystanders and other uninvolved third parties with distinct privacy rights and interests, who may not have been aware they were being recorded. This becomes an especially delicate issue when children are involved.

Similarly, recorded interactions might take place inside private residences, exposing to public view an otherwise inherently personal and “semi-sacred” space. A man’s (or woman’s) home is, as the saying goes, his (or her) castle.

Officers might also have genuine need to block release where other significant investigative concerns exist, such as the presence of confidential informants or judicially protected persons.

Further, police unions have pointed to the increasing number of attacks on law enforcement officers, arguing that the release of potentially upsetting or easily mischaracterized footage might spark violent reactions and needlessly endanger the lives of officers.

Those are all, in their separate contexts, well-founded concerns, though they are not substantiated in this case.

It is disappointing that the Salt Lake City Police Association chose this particular case as the one it would call out for improper release of video. From a practical standpoint, none of the concerns listed above is applicable to the footage released by Wubbels. Whatever concerns might exist are outweighed by the benefits incurred from holding law enforcement officers accountable for misconduct and raising public awareness of Fourth Amendment rights.

Although the department claims an internal investigation was launched within 24 hours of the incident, neither Payne nor Tracy was placed on administrative leave until after the video’s release drew a torrent of public outrage.

Prosecutors have since opened a criminal investigation, going so far as to request the FBI examine the officers’ actions for civil rights violations. The University of Utah police department—whose officers drew criticism for failing to aid Wubbels against Payne—instituted additional training for its officers.

Given the 30 days of administrative foot-dragging before any of these important accountability measures took place, it appears likely they would not have occurred at all but for the public release of the arrest footage.

The privacy concerns of this particular video are minimal, as the events occurred in a public hospital and involved public employees. The video was obtained by the primary subject, Wubbels, and released under her direction. Important personal information regarding the victim, who has since died, was edited out with sound removal.

While it is true that sometimes police officers are wrongly condemned for their actions by a media and citizenry that cannot truly appreciate the difficulty of making split-second decisions, that is not the case here. Payne’s assertions of authority were clearly unfounded in law, and his needless aggression was absolutely unprofessional in nature.

Wubbels was bear-hugged from behind, dragged out of a hospital, handcuffed, and placed in a police cruiser for 20 minutes simply for citing existing policy. This happened after Payne became aware the blood draw was not needed. It happened after multiple hospital staff members informed Payne of the policy his department had agreed to follow.

Sometimes, videos do not “speak for themselves.” This video does.

From a public relations standpoint, the union has placed itself in an unwinnable situation by appearing to shift blame away from the officers. But Payne’s actions are indefensible, and this delayed response gives the impression of an attempt to minimize the nature of his misconduct.

In short, the Utah blood draw incident is precisely the type of situation where the public release of footage is most useful. There is little to be gained from pretending that Payne was prejudiced by anything other than his own actions.

Understandably, the law enforcement community is often quick to defend the legal rights and the social honor of its individual members. Police unions at times play critical roles in ensuring wrongly accused and ill-treated officers are protected from a public that sometimes reacts based on emotion and not on fact.

There are, too, legitimate battles that might be fought over when and how police body camera footage should be made public, or who should ultimately make that decision.

This is not the place to fight that battle.