Here’s How Much Money the NFL Rakes in From Taxpayers 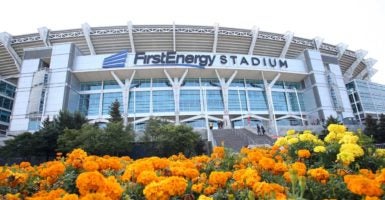 A report on Watchdog.org says that over the past two decades, the NFL has raked in about $7 billion of taxpayer money to spend on stadium renovation and building. (Photo: Aaron Josefczyk/UPI/Newscom)

The National Football League is now plunged into politics as players throughout the sport kneel for the national anthem and President Donald Trump continues to rebuke them publicly.

Undoubtedly, the situation has left many fans and non-fans of the league conflicted or angry.

This fiasco may, however, open the eyes of the public to a serious and generally unchecked issue: billionaire NFL owners sponging enormous amounts of money from taxpayers through crony capitalist schemes.

The fact is that a business that raked in $14 billion in revenue in 2016 is heavily subsidized by local, state, and federal money based on dubious claims about stimulating the economy.

The problem is rampant.

One report on Watchdog.org said that over the past two decades, the NFL has raked in about $7 billion of taxpayer money to spend on stadium renovation and building.

Another study from the Brookings Institution showed that federal taxpayers have subsidized the construction of 36 stadiums at a cost of over $3.2 billion since 2000.

Michael Sargent, an infrastructure expert at The Heritage Foundation, wrote about how sports teams use specially crafted tax breaks to get the public to finance their massive projects.

“Tax-exempt municipal bonds are typically reserved for public-use projects such as bridges, water systems, and other infrastructure,” Sargent wrote for The Daily Signal. “Yet because of a loophole in the tax code, private-use stadiums can take advantage of this tax break, and have done so prolifically.”

In fact, only a handful of NFL and other major league teams use privately-financed venues to host their games.

It would seem after sinking enormous investments into sports franchises, cities would reap serious financial benefits in return.

But this isn’t the case at all.

Research from George Mason University has shown that not only do communities gain almost no economic benefits from subsidized sports teams, but some findings “indicate harmful effects of sports on per capita income, wage and salary disbursements, and wages per job.”

When likely voters in Nevada were asked if they favored or opposed using $500 million in taxpayer dollars to fund a stadium for the Oakland Raiders to move to Las Vegas, they overwhelmingly said “no.”

According to the KTNV-TV 13 Action News/Rasmussen Reports poll, 60 percent of Nevada voters opposed the funding, and only 28 percent supported it.

Given the massive discontent over national anthem kneeling and rampant politicization of the once unifying sport of football, perhaps now Americans will turn a more skeptical eye toward how their sports teams rely on public money and actually do something about it.

if the end result of Kaepernick's protest is an end to taxpayer funded stadiums this all will have been worth it https://t.co/wF1m5zoPiv

There are some in Congress who have taken notice.

Lankford said in a statement in June:

The federal government is responsible for a lot of important functions, but financing sports stadiums for multimillion—sometimes billion—dollar franchises is definitely not one of them. Using billions of federal taxpayer dollars for the subsidization of private stadiums when we have real infrastructure needs in our country is not a good way to prioritize a limited amount of funds.

This movement has picked up steam in recent weeks, according to Kerry Picket of The Daily Caller.

On Tuesday, Gaetz became the lead sponsor of legislation that would end the tax-exempt status of professional sports leagues.

NFL and other sports teams have a deep financial interest in getting taxpayers to pay their bills, so it will take a widespread concerted effort on the part of the public to end this gravy train.

Since NFL billionaire owners have gone out of their way to accommodate millionaire players in standing down for the national anthem, perhaps taxpaying Americans should start withholding money from the privileged and let them all stand on their own two feet.

Now may be the perfect time to finally do it.

This article has been updated to include legislation sponsored by Rep. Matt Gaetz, R-Fla.