I Went to a ‘Remembering Our Fallen’ Memorial in DC. Here’s What I Saw. 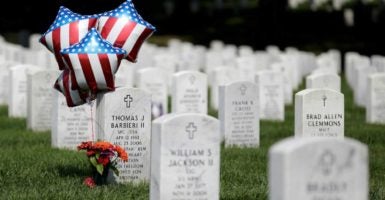 Thousands of Americans have died in the conflicts that followed the attacks on 9/11. (Photo: Joshua Roberts/Reuters /Newscom)

In the 16 years that have passed since Islamist terrorists attacked this country on 9/11, thousands of Americans have given their lives in the conflicts that followed.

On Friday, I had the opportunity to visit a “Remembering Our Fallen” exhibit at the base of the Lincoln Memorial. It was a pictorial tribute to the men and women in uniform who paid the ultimate price for our country and was put together by the same organization that organizes the Washington, D.C., “Honor Flights.”

It was fitting that the memorial was located in the shadow of President Abraham Lincoln, who said in his famed Gettysburg Address, “The world will little note nor long remember what we say here, but it can never forget what they did here.”

The generation that served following the 9/11 attacks also deserves to be remembered.

The brave Americans, the real 1 percent, who donned the uniform and died for their country are honored in a moving display of pictures. The photos, which number in the thousands, depict the soldiers in uniform as well as in civilian life to demonstrate how these were just average Americans doing extraordinary things.

I talked to people and organizers who were at the event, and spoke about other, similar memorials that are taking place across the country.

On this 9/11, and in general, we should go out of our way to remember the brave men and women, living and dead, who have sacrificed so much.

This report has been modified to include the full quote from the Gettysburg Address.