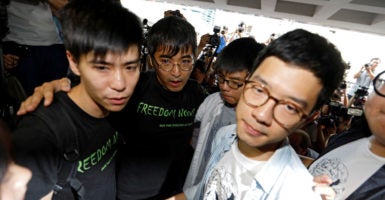 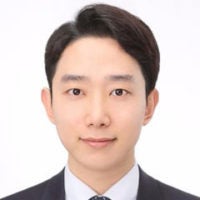 Jaejun Lee is a visiting fellow at The Heritage Foundation's Asian Studies Center.

Joshua Wong, Nathan Law, and Alex Chow—the leaders of the “Umbrella Revolution” student movement, which demanded democracy in Hong Kong in 2014—were sentenced last month to six to eight months in prison by an appeals court.

Wong, Chow, and Law were involved in the Occupy movement that advocated democracy and sought the right for Hong Kong citizens to directly elect the chief executive—Hong Kong’s equivalent of a president.

Protests were mostly peaceful and predominately student-led. But as the face of democracy in Hong Kong, the Umbrella Movement was seen as a direct threat to Beijing.

Just days prior to receiving their prison sentence Aug. 17 from the Hong Kong Court of Appeal,  the Eastern Magistrates Court issued a sentence of community service and suspension for one year to Wong, Law, and Chow. After the prosecution appealed, they were given a more heavy-handed sentence.

Most significantly, the six- and eight-month prison terms bar them from running for the Legislative Council for five years and has the effect of politically silencing these democracy advocates.

Joshua Wong, Nathan Law, Alex Chow, and other Umbrella Movement protesters are pro-democracy champions worthy of admiration, not criminals deserving jail time. The political prosecutions and resentencing of these young people is shameful and further evidence that Hong Kong’s cherished autonomy is precipitously eroding. Beijing’s heavy hand is on display for all to see as they attempt to crush the next generation of Hong Kong’s pro-democracy movement and undermine the ‘one country, two systems’ arrangement. U.S. policy must reflect these realities, which is why I am pressing for swift Senate passage of the Hong Kong Human Rights and Democracy Act.

The sentencing of these three young men may signal a substantial step back in the independence of Hong Kong’s judiciary.

It comes on the heels of a number of significant warning signs, including in November 2016, when the National People’s Congress Standing Committee issued an interpretation of Hong Kong’s Basic Law that made advocates for democracy or independence guilty of violating the Basic Law.

Decisions interpreted by the committee have the effect of shaping Hong Kong law because they set judicial precedents that judges employ throughout the Hong Kong judicial system.

While China is not supposed to interfere in Hong Kong’s judiciary, this interpretation of Basic Law has essentially the same effect.

China and Hong Kong’s relationship is predicated on a “one country, two systems” model, which grants Hong Kong the authority to pursue capitalist policies and retain some degree of autonomy on political issues.

The special autonomous region has historically prided itself on having an independent judiciary, which is supposed to be outside the People’s Republic of China’s control. In fact, the World Economic Forum ranks the independence and effectiveness of Hong Kong’s judiciary above the U.S. judicial system.

Anson Chan, former chief secretary of Hong Kong, fears that if the world does not act to defend the autonomy of Hong Kong, the “one country, two systems” policy will exist in name only.

But this is hardly the first time that China has trampled on the freedom of Hong Kong citizens. This year, China abducted and imprisoned a number of Hong Kong publishers.

There were also signs during the Umbrella Revolution that autonomy was receding, including when Chinese riot police used tear gas and rubber bullets to quell protests, and when Wong and other student protesters were arrested for exercising their freedom to assemble.

The U.S. should continue to closely watch the state of freedom in Hong Kong and act in ways that support Hong Kong’s autonomy from China.