How to Bring Real Stability to the Health Care Market 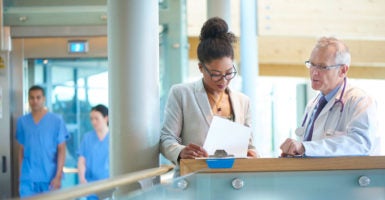 The repeal of select taxes, such as Obamacare's tax on insurance premiums, would aid in bringing about market stabilization. (Photo: iStock Photos)

Following Congress’ failure to enact “repeal and replace” legislation this summer, the new Obamacare buzz phrase for the fall is “market stabilization.”

An ad hoc group of House members calling themselves the “Bipartisan Problem Solvers Caucus” has released a draft outline of a proposal to Stabilize the Individual Market, while in the Senate, the Health, Education, Labor and Pension (HELP) Committee will hold hearings with governors and state insurance commissioners Sept. 6 and 7 on stabilizing premiums in the individual insurance market.

The first point—which bears repeating, even though it should be obvious—is that the reason the market needs stabilizing is because it was destabilized by Obamacare’s flawed design.

A second relevant point is that Obamacare has effectively produced an individual health insurance market with two distinct subsets of people—those that get subsidies for their coverage and those that do not—and has had different effects on each group.

Of the current 17.1 million individual market enrollees, half (8.4 million) are buying coverage without any subsidies, mostly off the exchanges. The other half (8.7 million) are getting subsidized coverage through the Obamacare exchanges.

Many of those buying coverage through the exchanges can get financial help twice over—their premiums subsidized, and their cost-sharing reduced. Of those receiving premium subsidies, two-thirds also qualify for reduced cost-sharing (lower deductibles and copayments), funded through separate “cost-sharing reduction” subsidies paid to their insurers.

Because Congress has so far not appropriated funding for the cost-sharing reduction subsidies, insurers are uncertain how long the Trump administration will continue the Obama administration’s policy of paying those subsidies anyway.

In response, the bipartisan caucus proposes to “[b]ring cost-sharing reduction (CSR) payments under the congressional oversight and appropriations process…” However, they then add the clause, “…but ensure they have mandatory funding.”

The call for “mandatory funding” implies that the group also wants to amend the statute to make the subsidies an entitlement, with funding authorized by a permanent appropriation. That would be a very bad move.

An important benefit of the appropriations process is that it forces Congress to periodically reexamine programs and decide whether to amend their design. In contrast, creating a new entitlement for cost-sharing reduction subsidies would entrench an unnecessarily complicated and convoluted health insurance subsidy design that Congress should revise anyway.

Furthermore, not paying the cost-sharing subsidies won’t result in enrollees losing coverage. An analysis by the Congressional Budget Office confirms that the effect of insurers increasing premiums to cover the loss of cost-sharing reduction subsidies would be to simply shift those subsidies from the back end to the front end.

In other words, enrollees who qualify for cost-sharing reductions would be charged higher premiums, but because of the way Obamacare works, that would result in those enrollees receiving larger premium subsidies that paid all, or nearly all, of the additional premium.

With respect to unsubsidized enrollees, the bipartisan caucus proposal—unlike this summer’s failed House and Senate bills—does not include any Obamacare regulatory relief or provisions to create incentives for continuous coverage.

This means the proposal essentially does nothing to address the burdens imposed on unsubsidized enrollees, who bear the brunt of the premium increases and coverage disruption caused by Obamacare’s insurance market regulations.

It is people buying health insurance without subsidies that most need relief from Obamacare’s escalating premiums and the return of disappearing health plans.

The congressional proposal calls for creating “a dedicated stability fund that states can use to reduce premiums and limit losses for providing coverage—especially for those with pre-existing conditions.”

This idea—adding more subsidies to a damaged system—is neither an adequate nor effective solution to Obamacare’s flawed insurance regulations that have produced escalating premiums and adverse selection in the market.

The proposal says that the new spending “should be paid for,” but makes no commitments on that score. It provides only a list of “potential” offsets—five of the six of which entail reductions in Medicare spending.

The obvious offset would be to phase out the unjustifiable extra federal funding to states for the Medicaid expansion, but that is not part of the proposal.

Finally, the proposal floats the possibility of “some technical legislative changes” to the state waiver process under Section 1332 of Obamacare. However, absent further specificity on what those changes might be, it is impossible to say if they would give states any meaningful additional regulatory flexibility.

In sum, while it is clear that the House bipartisan group thinks Congress should appropriate funding for cost-sharing reduction subsidies, the rest of their market stabilization proposal wouldn’t actually do much to stabilize the individual market.