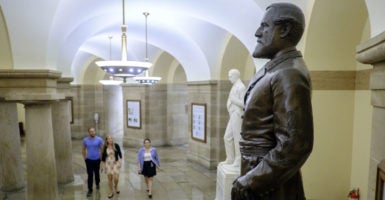 A new poll released Thursday shows a majority of U.S. voters want Confederate statues to remain where they are.

This poll comes as local leaders around the country are calling for the removal of Confederate monuments following violence surrounding a white nationalist rally in Charlottesville, Virginia, where groups gathered to protest the removal of a statue of Robert E. Lee. A group of protesters also toppled a monument of a Confederate soldier in Durham, North Carolina, Monday evening.

President Donald Trump sent off several tweets criticizing the removal of Confederate statues. Trump defended the statues and monuments in a series of tweets Thursday.

“Sad to see the history and culture of our great country being ripped apart with the removal of our beautiful statues and monuments,” Trump tweeted. “You can’t change history, but you can learn from it. Robert E Lee, Stonewall Jackson – who’s next, Washington, Jefferson? So foolish!”

“The beauty that is being taken out of our cities, towns and parks will be greatly missed and never able to be comparably replaced!” Trump added minutes later.

The NPR/PBS NewsHour/Marist poll was conducted by phone between Aug, 14 and Aug. 15. The 1,125 participants are all U.S. citizens. The margin of error is 2.9 percentage points.