Where Is the Corporate Disavowal of Black Lives Matter? 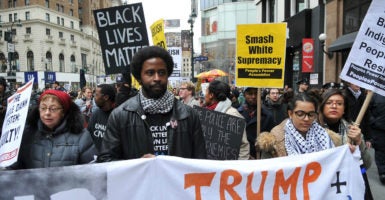 These silly string-spined CEOs have sided with social justice agitators, Beltway media enablers, and Democratic resistance knuckleheads who believe Trump was wrong to condemn violence and hatred on all sides of the political spectrum.

Never mind that of the four people arrested after the violent outbreak in Charlottesville, Virginia, this weekend, two were identified with the white nationalist movement and the other two were left-wing “Antifa” counterprotesters.

One of those radical leftists is the man identified as having reportedly punched a female reporter for the D.C.-based newspaper The Hill.

But since that doesn’t fit the national media narrative of journalists allegedly being victimized by right-wing incitements to violence, mum’s the word from corporate media executives and the rest of the preening CEOs.

Merck CEO Kenneth C. Frazier claimed he stepped down from the Trump business panel because he felt “a responsibility to take a stand against intolerance and extremism.”

But Frazier, who served on President Barack Obama’s Export Council, felt no equivalent responsibility to take a stand against intolerance and extremism when the White House invited leaders from the violence-inciting Black Lives Matter movement for a forum on policing in July 2016.

The invitation was a grievous affront to law enforcement officers and their families across the country outraged at the deadly ambushes committed against cops in Dallas and Baton Rouge that summer, along with several other forgotten cop killings fueled by Black Lives Matter-linked hate and vengeance.

At least 11 police have been shot dead and at least nine more wounded by Black Lives Matter protesters, activists, and/or supporters to date.

One of the surviving policemen in the Baton Rouge massacre filed suit last month against Black Lives Matter and laid out the case against its leaders, who “not only, incited the violence against police in retaliation for the death of black men shot by police, but also did nothing to dissuade the ongoing violence and injury to police. In fact, they justified the violence as necessary to the movement and war.”

The permanently disabled cop’s lawsuit recounts escalating riots, arson, and plundering after the police-involved deaths of Michael Brown and Freddie Gray in Ferguson, Missouri, through the ambushes in Dallas and Baton Rouge, and leading up to the Obama administration’s embrace of Black Lives Matter’s leaders.

After the meeting, Black Lives Matter leader DeRay McKesson responded to questions about his movement’s culpability for inciting violence by asserting that his “people take to the streets as a last resort. … So when I think about anything that happens when people are in the street, I always start by saying, ‘People should not have had to have been there in the first place.'”

As the lawyers for the Baton Rouge cop, who must remain anonymous to protect his family, properly concluded: “These statements were a ratification and justification of the violence.”

But instead of recriminations, the militants of Black Lives Matter enjoy continued praise and coddling from corporate America. Tech execs from Netflix, YouTube, and Google all donated to McKesson’s failed mayoral bid in Baltimore.

Business execs have been coughing up untold hundreds of millions of dollars to Black Lives Matter and related causes, funneled through left-wing nonprofits such as the Ford Foundation and Borealis Philanthropy.

On Tuesday, Walmart executive Doug McMillon wagged his finger at Trump, urging “elected officials to do their part to promote a more just, tolerant, and diverse society.”

This from the head of a retail giant that only recently stopped selling racially divisive, anti-cop taunting, violence-glamorizing T-shirts that bragged: “Bulletproof: Black Lives Matter.”

And the disavowal double standards beat goes on.