Some Bad Ideas, Like Zombies, Never Seem to Die. A ‘No First Use’ Nuclear Policy Is One of Them. 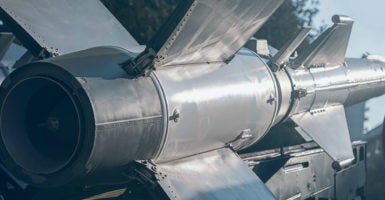 Some argue that the United States should declare a “no first use” nuclear weapons policy.

This would mean that the United States would only use a nuclear weapon in response to another country’s nuclear attack.

Proponents of this idea generally argue that an adoption of this policy would get us closer to a world without nuclear weapons.

Such optimism couldn’t be further away from the truth. A no-first-use nuclear weapons policy would make the United States and allies less safe from devastating attacks.

To assume that the only utility of nuclear weapons is to retaliate after a nuclear attack is to ignore historical experience. The United States used nuclear weapons in 1945 to bring an end to the most devastating conflict in the modern history of mankind.

That conflict, World War II, was fought predominantly with conventional weapons. Comfortably assuming that such devastation could never happen again is foolish and imprudent.

Aside from the fact that other countries are unlikely to trust any potential U.S. no-first-use declarations, a world without nuclear weapons is not a better world than the one we currently have, which involves a large degree of nuclear ambiguity.

A no-first-use nuclear weapons policy would undermine America’s allies, particularly those that live in volatile regions.

If we accept that nuclear weapons help to deter large-scale conventional attacks—as experience since the dawn of the nuclear age indicates so far—undermining that notion does not serve any useful purpose and could incentivize allies to find other options to provide for their own security.

A development of nuclear weapon capabilities could be one such option with negative consequences for U.S. nonproliferation goals.

Under successive Democratic and Republican administrations, the U.S. has continued to reject a no-first-use nuclear weapons policy based on sound reasoning. Those reasons remain sound today.