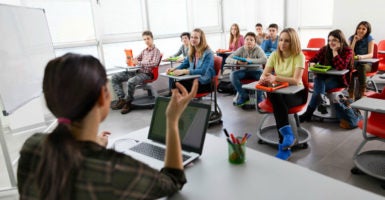 Challenge Day’s board of directors is dominated by individuals who openly support left-wing leaders and causes. (Photo: iStock Photos) 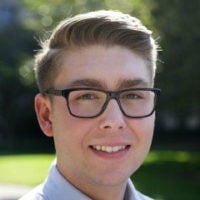 Parents beware: A program called Challenge Day that applauds a culture of victimhood is planting the leftist agenda into young minds under the guise of anti-bullying education.

The program uses the power of peer pressure and groupthink to impress upon high school students the idea that everyone is a victim.

Challenge Day is no small initiative. According to the program’s website, it has been held at more than 2,200 high schools nationwide and reached millions of students.

Challenge Day purports to teach tolerance and acceptance, yet nearly every member of its board of directors and Global Leadership Council is politically left of center.

This is an organization that preaches diversity but is not politically diverse itself.

The most concerning member of Challenge Day’s global governing board? The former “green-jobs czar” under President Barack Obama, Van Jones.

While Jones was in jail after a mass arrest, according to the East Bay Express, he said, “I met all these young radical people of color—I mean really radical, communists and anarchists. And it was, like, ‘This is what I need to be a part of.’”

When in high school, I myself participated in Challenge Day. At 16 years old, I was a junior at Grosse Pointe North High School, a public school outside Detroit.

I was asked to step forward if I were ever called a bad kid, tried to run away, isolated myself, was made fun of by someone I trusted, or felt as if I were treated differently because of my skin color.

Approximately 100 of my peers joined me in this exercise. During this session, I felt pressured to cry, and if I didn’t cry I was made to feel heartless. Whenever someone burst out in tears, we were asked to raise our hands in unity with our hands in a “love gesture.”

In truth, it felt like an initiation ceremony for a cult.

Everyone was asked to confess their challenges. At that age, I learned to move on from my struggles and show strength when faced with adversity. Yet, I felt compelled to come up with something to say with a tear in my eye.

It felt “cool” to be a victim and to cry during public “apologies.”

During the exercise, I finally came up with an experience that fit the program’s conception of victimhood. On Election Day in 2012, I wore a “Mitt Romney for President” T-shirt to school.

In a discussion about the election, one of the students sitting next to me in class opined that those who refused to support Obama were racist.

So, at Challenge Day when asked to step forward if I had been treated differently because of my skin color, I did. Yet, students did not display the “love gesture.” Instead, I was met with blank stares.

Perhaps I would have been better off apologizing for my sex or my skin color.

Although schools often ask for the permission of parents before students participate, the program largely leaves parents out of the equation and often unaware of the curriculum of the program, or what their children say that day.

Organizers do not apprise parents of any identified problems and, as a result, parents may not know if their children need actual professional help.

After the election of President Donald Trump, the organization released a statement on its website implying that Trump is a bully, noting, “Since the election, reports have arisen of young people on campuses all over the United States who do not feel safe on campus due to acts of violence, bullying, racism and intimidation.”

Challenge Day conveniently left out the fact that the president has encouraged no such behavior and that many of these reports have been proven false.

Furthermore, the organization forgets the countless reports of violence against conservative students, including the violent riots at the University of California, Berkeley when conservatives attempted to speak there, the left-driven riots and arson during Trump’s inauguration, and the anti-Trump May Day demonstrations in Portland, Oregon.

In the same statement, Challenge Day’s endorsement of the politics of privilege becomes more apparent. It said: “We stand in solidarity with all of our communities; from the marginalized to those who have privilege and are committed as allies.”

Challenge Day even released a “Post-Election Kindness Grant.” The grant goes to schools that “have experienced post-election bullying” and want to participate in Challenge Day programs.

It must think the general public is naïve when it says that the grant is not driven by a leftist agenda. From my research, Challenge Day’s “post-election” statement and grant were not issued after previous elections.

If a school doesn’t receive a “Post-Election Kindness Grant,” it can always rely on the taxpayer. According to Challenge Day’s website, schools “have used a variety of federal, state, and foundation grants to pay for Challenge Day programs.”

According to its website, “Common grants include School Climate Transformation Grants, GEAR UP, TRIO programs including Upward Bound, i3 Grants, School Improvement Grants, and Title 1 funding, among others.”

Yes, the taxpayer is footing the bill for additional leftist indoctrination programs in high schools.

No longer are young people taught to find the good in people and society, to be optimistic, to be self-reliant, to be hopeful, and to have good relationships with their families.

Programs like Challenge Day teach students to find divisions constantly: Everyone and everything is racist, poses a direct threat to their safety, or is the product of some form of social privilege.

Instead of teaching resilience, respect, and independence, students are taught to break down and cry, discuss their feelings, and check their social “privilege.”

Want to end bullying? Teach the golden rule: “Do unto others as you would have them do unto you.” Or, teach the great commandment: “Love thy neighbor as thyself.” That’s all you need.

The kind of victimhood culture that Challenge Day promotes has devastating consequences for our society. This is particularly the case when students become adults who are unable to recognize the importance of free speech and individual responsibility.

If Challenge Day is coming to your child’s school, hold the school’s leadership accountable. Ask how the program is funded or if a comparable program promoting individual responsibility and traditional values is offered.

Also, the Department of Education should ensure that federal funds no longer finance programs with such fractious ideological agendas.

Until students, parents, educators, and public policy leaders take action against snowflake-producing programs such as Challenge Day, our society will continue down this perilous path of political correctness and national division.