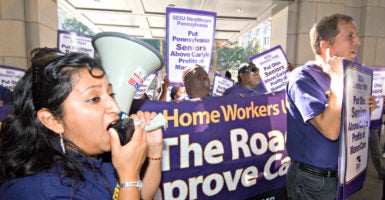 Some 20,000 workers have left the Service Employees International Union in two states, a shock to the labor organization that was riding high when some of its members staged this 2007 protest in Washington, D.C. (Photo: Bill Clark/Roll Call/Newscom)

Union leaders in Washington state who plotted to undermine a U.S. Supreme Court ruling overturning mandatory union dues are now seeing the other end of that boot in the form of free speech activism and diminished membership.

“What a favorable Supreme Court ruling really means is that our work is just beginning,” @FreedomFdtn’s Brian Minnich says.

But the powerful Service Employees International Union partnered with compliant government officials to prevent the caregivers from understanding their First Amendment rights, according to the Freedom Foundation, a nonprofit think tank headquartered in Olympia, Washington.

The Freedom Foundation’s Brian Minnich told The Daily Signal that payroll data obtained from the state of Oregon indicate 11,399 out of 28,667 home care providers no longer paid dues to the SEIU affiliate there. That’s a drop of almost 40 percent.

In Washington state, payroll data from April, the latest available, show 9,100 former members of SEIU and the Washington Federation of State Employees no longer paid dues.

Beginning in November 2014, the Freedom Foundation hired and trained dozens of canvassers to educate home-based health care aides about their constitutional rights, as affirmed in that year’s Supreme Court ruling Harris v. Quinn, Minnich said in an interview with The Daily Signal.

The high court ruled that unions such as SEIU, which represent “quasi-public employees,” may collect dues only when they are offered voluntarily.

“We are an action tank, not just a think tank, and our strategy has been to inform SEIU members of their free speech rights and to let them know they have certain rights, including the right to not join a union and pay dues,” said Minnich, executive vice president of the Freedom Foundation, adding:

This effort has been very successful and remains ongoing. In the past year alone, we have cost the SEIU union [in Washington state] more than $10 million. We’ve been able to calculate this figure based on the number of people we know who have left the union, and what this has cost the union in terms of lost revenue from dues.

There is also the amount of money the union has spent on legal fees. Their legal fees have been huge because they are fighting us, and that’s money that they can’t spend on politics.

In 2016, policy analysts at the Freedom Foundation estimate, the SEIU in Washington state spent nearly $1 million on private law firms, an amount largely devoted to litigation against the foundation.

Since the only state payroll data the foundation has for Oregon is from May, they say, it is difficult to quantify how much SEIU 503, based in Salem, Oregon, has lost in union dues since the Supreme Court’s Harris v. Quinn ruling.

The Daily Signal sought comment more than 10 days ago from the SEIU affiliates in Washington state and Oregon on their litigation and other disputes with the foundation. They had not responded by publication deadline.

The individual care providers who have left SEIU include home-based health care aides who receive Medicaid payments in exchange for services to needy and disabled individuals, who typically are family members. They also include child care providers paid by the state to serve low-income families

The Freedom Foundation initiated its outreach efforts in November 2014 with direct mail, email, and phone calls focused on the 7,000 child care providers who were members of Seattle-based SEIU 925 at the time. The following summer, the foundation sent out canvassers to meet individually with child care providers.

As of this past spring, almost two-thirds of family or child care providers no longer were paying dues to SEIU 925, according to the foundation.

Outreach efforts directed at 35,000 home care aides represented by Seattle-based SEIU 775 as of last year proved to be more difficult.

SEIU 775 fought in court and in the Washington state Legislature to prevent the Department of Social and Health Services from releasing a list of home care aides and contact information to the Freedom Foundation.

In April 2016, a state appeals court ruled against SEIU 775, saying the information had to be disclosed under the state’s Public Records Act.

The union also had lobbied state lawmakers to amend that law in 2015 and 2016 so that contact information for the individual care providers would be exempt from public records requests. This effort also failed.

In early 2016, the Freedom Foundation began to receive contact lists from sources inside SEIU, making it possible to do the outreach. In September, the foundation received an official list of providers from Washington state officials after the state Supreme Court declined to hear the union’s appeal.

A separate but related educational campaign connected Freedom Foundation activists with about 1,000 workers who help the disabled and provide translation services for speakers of other languages. They were part of the Washington Federation of State Employees.

A foundation study called the “Undue Influence Report” pulls together campaign finance data. It shows that Washington Gov. Jay Inslee, a Democrat, raked in almost $6 million from organized labor in his 2012 race for governor, compared with about $18,000 for his Republican opponent.

SEIU alone donated about $1.8 million to Inslee during the 2012 cycle.

“Union officials with the SEIU have implemented a comprehensive set of responses to Harris v. Quinn making it possible for them to skirt the law,” Nelsen said. “We have litigation challenging each of them, but it remains a tough fight given how well-connected the SEIU is with top government officials.”

SEIU 775 negotiated a collective bargaining agreement with the Inslee administration that calls for union dues to be withheld automatically unless an individual caregiver explicitly states that he or she doesn’t want dues to be deducted.

“This means every caregiver has union dues deducted from their paycheck regardless of whether or not they have signed up for the union,” Nelsen said. “We know from court filings that there are thousands of individuals who are having union dues deducted without their authorization, which we think is illegal.”

David Dewhirst, a litigation counsel with the Freedom Foundation, estimates that SEIU 775 collects $3.5 million in illegal dues each year. Each home caregiver pays about $585 per year to the union, he said, and about 6,000 caregivers did not give written authorization to the union to deduct dues.

The foundation lost in the Supreme Court of Washington, however, when it argued in May that automatic deduction of dues violates state law.

The organization has pursued a federal lawsuit against the Inslee administration and SEIU 775, seeking, in Nelsen’s words, “to end the various illegal and coercive means by which [individual care providers] are signed up for union membership.”

The Daily Signal sought comment from Inslee, but did not receive a reply from the governor’s press office by publication deadline.

In response to the Harris ruling by the nation’s highest court, SEIU changed the fine print on its membership form. Now, those who sign the form can’t cancel membership dues unless they submit a written statement during a 15-day annual window from 30 to 45 days before the anniversary of the date they first signed.

Until recently, caregivers were required to attend union presentations delivered as part of their orientation process, administered through the Washington state Department of Social and Health Services.

Department officials were not permitted in the room while union officials delivered their pitch to incoming caregivers.

Meanwhile, SEIU operatives fell back on what Nelsen describes as a “last-ditch effort” to prevent the Freedom Foundation from getting the names and contact information of caregivers—in the form of Initiative 1501, which won voter approval in November.

Unions advertised the initiative as a measure that would protect against identity theft, he said, but the real objective was to prevent the foundation from communicating with caregivers about their rights.

The Freedom Foundation filed suit in federal court, challenging the constitutionality of Initiative 1501 under the U.S. Constitution’s First and 14th Amendments.

The measure violates caregivers’ First Amendment right of free association and the equal protection clause of the 14th Amendment, foundation lawyers argue, because unions can get ahold of personal contact information for caregivers while denying it to others.

The Freedom Foundation, which marks its 26th anniversary this year, also has offices in Oregon and California, where it is expanding outreach efforts. Nelsen and other labor policy analysts also are eyeing legal developments in other states.

Minnesota, for instance, stands out as a particularly important test case. In that state, home caregivers accuse the local SEIU of forging signatures on union membership cards and committing voter fraud in a union election conducted by mail-in ballot.

New cases challenging mandatory union dues continue to work their way up to the Supreme Court.

Minnich, the foundation’s executive vice president, cautions against the idea that favorable Supreme Court rulings will resolve the problem of labor practices that suppress free speech without committed activism.

“There is a certain amount of thinking out there that says favorable Supreme Court rulings will solve this problem,” Minnich said. “But in fact, when you look at our state [Washington] and Oregon and California and Minnesota, the lesson here is that state government officials and unions will continue to play games.”