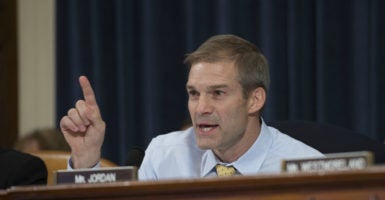 "This idea that we are going to leave here and go home for five weeks makes absolutely no sense," says Rep. Jim Jordan, R-Ohio, who is among members of the House Freedom Caucus calling on House Speaker Paul Ryan to scrub the August recess so lawmakers can work on pressing legislative priorities. (Photo: Molly Riley/UPI/Newscom)

Members of the House’s most conservative caucus again are calling for leadership to cancel the August recess so lawmakers can work longer on priorities such as health care and tax reform.

“It just makes sense for our leadership to keep us here to focus on getting things done,” @RobWittman says.

The latest pressure Wednesday from conservative lawmakers came after Senate Majority Leader Mitch McConnell announced the day before that the Senate will delay the beginning of its own recess from July 31 until mid-August.

“I applaud Leader McConnell for being willing to stay in, but more importantly than that it is all about getting the people’s business done,” Rep. Mark Meadows, R-N.C., chairman of the House Freedom Caucus, said at an early afternoon press conference, adding:

And so whether it is hearings or actually working on legislative matters that we force the issue, the time is now for us to act. The time for excuses are over, and if we don’t get results, we believe there should be no recess.

Much of what Congress has yet to address also is important to the success of President Donald Trump’s agenda of creating jobs and boosting the economy.

Rep. Rob Wittman, R-Va., a member of the Freedom Caucus, said that unlike Congress, ordinary Americans would have a price to pay if they didn’t complete their work.

“It just makes sense for our leadership to keep us here to make sure the focus is on getting things done,” Wittman said. “Folks in the real world that have to go to a job every day don’t get to take vacation if their job does not get done.”

In his announcement pushing back the Senate’s recess, in which he took a shot at Democrats, McConnell said:

In order to provide more time to complete action on important legislative items and process nominees that have been stalled by a lack of cooperation from our friends across the aisle, the Senate will delay the start of the August recess until the third week of August.

House Speaker Paul Ryan has not announced any schedule changes.

“We are in active conversations as a team to discuss what our schedule is going to be,” Ryan said, according to a Roll Call report. “But right now, we plan on hitting our mark, getting our work done and making sure that we fulfill all of our responsibilities. We’ll do whatever it takes to get there.”

The Daily Signal sought comment from a key Ryan aide, who did not respond by publication deadline.

The House Freedom Caucus took an official position in early June on staying in Washington to work during August. Some members of the caucus signed on to a June 30 letter to Ryan, R-Wis., asking him to cancel the recess.

Statement on postponing Aug Recess: "It is imperative that the additional weeks are coupled with decisive action" https://t.co/k4cAiK78A7

“We request that you cancel Congress’s current plans to recess for the month of August to ensure there is enough time to address the long list of pressing issues on our docket,” Rep. Andy Biggs, R-Ariz., and the others wrote in the letter, which he organized.

In a prepared statement Tuesday, the Freedom Caucus praised McConnell’s decision to shorten the August recess “to accomplish the important work of the American people.”

Since Biggs’ June 30 letter,  the Arizona Republican has continued calls to cancel the recess.

Renewing my call for the House to #CancelAugustRecess. We cannot afford to leave town and default on our priorities and promises. #AZ05 pic.twitter.com/RAhyjyjNvZ

At the press conference, Biggs said Americans repeatedly have asked for action.

“It was last November that the American people elected a change agent as the president of the United States of America,” Biggs said, adding:

All of us were elected to help enact those changes and we’ve done some good brush-clearing, but we’ve got some major, major tough timber yet to cut and bring in. If we want to keep our promises and keep advocating for the changes we promised to make, we need to be here enacting those changes.

“Repealing and replacing Obamacare, in fact doing tax reform to reduce the tax burden on the American people, building a wall and securing our southern border, infrastructure, all of those things we campaigned on,” Jordan said. “This idea that we are going to leave here and go home for five weeks makes absolutely no sense. We think we should stay here.”

Rep. Tom Garrett, R-Va., said the well-being of the American people should be lawmakers’ top priority.

It's the right call. I urge @SpeakerRyan to do the same. We must do the work the American people sent us here to do. #VA01 https://t.co/KE051vIJP5