Fixing a Foster Care System That Would Ban Mother Teresa 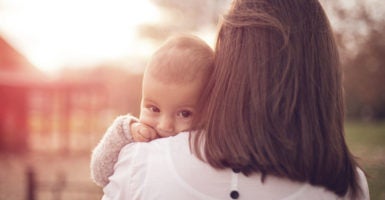 The ACLU is suing faith-based adoption agencies in several states, even as the need for foster care and adoption stands at a record high. (Photo: South_agency/Getty Images)

In one of the most moving parts of the president’s State of the Union address, President Donald Trump honored Ryan Holet—a police officer who decided to adopt the baby of a heroin addict.

After some thought and reflection, Holet and his wife decided to adopt the baby, who was born in October. They named her Hope. Little did they know that three months later, they’d be attending the president’s annual address.

Stories like Hope’s are inspiring, but sadly rare among kids born into her situation. Children like her often end up in foster care and never find a happy ending.

What’s even more tragic, however, is that the ACLU and other groups are doing everything they can to prevent that happy ending. In many states, the ACLU is fighting to have faith-based foster care and adoption agencies shuttered.

Why? Because those agencies operate consistently with the same religious beliefs that lead them to serve these vulnerable children, including some that place children only in homes where they’ll have a married mother and father.

The ACLU wants to give these faith-based agencies an untenable choice: Renounce your faith, or stop helping children.

The most absurd aspect of the ACLU’s activism is that in each of the states where it is threatening faith-based adoption agencies, there are secular adoption agencies more than willing to place children in other family arrangements—no one is prevented from fostering or adopting.

This purge of religious adoption agencies has already taken place in Illinois, where activists successfully shut down Catholic Charities, displacing 3,000 children because they dare to share the same religious tradition that motivated Mother Teresa to care for the orphans of Calcutta.

Faith-based agencies like Catholic Charities are an essential element of a foster care system that needs more—not fewer—foster care providers, especially as the opioid crisis worsens.

While some kids are reunited with their parents, more than a quarter never will be, leaving over 100,000 of them waiting to be adopted.

The reality is that more than 60 percent of kids who spend time in foster care spend two to five years there without being adopted, while almost 20 percent spend more than five years in the system.

Many never find a family simply because there are not enough high-quality foster homes, group homes, and other critical services.

The demand for foster care has never been higher. Nationally, the number of kids in foster care rose by 10 percent in the last six years. In Florida, for example, that number rose by 129 percent in just three years.

Drug abuse is the No. 1 reason children enter the system. When I worked in Florida’s child welfare system, I witnessed firsthand families ravaged by drug abuse. More than 60 percent of child removals last year were due to substance abuse, a figure that nearly doubled in the last few years.

Now, the ACLU and others on the left have decided that this public health emergency is the right time to sabotage these children’s hopes of being placed with a loving family.

>>> Q&A: Rep. Mike Kelly on How to Help Faith-Based Adoption Agencies Under Attack

Congress should protect our children from this misguided effort to score culture war points at the expense of our country’s children.

This bill takes the right approach. Unlike the ACLU’s litigation strategy, which excludes, this bill welcomes everyone who is willing to lend a hand to help an already overwrought foster care system.

This is too urgent to ignore. The opioid health crisis has children pouring into the foster care system. States must be permitted to take federal funds to care for children without driving out some of the best, longest-serving foster care providers from a system that desperately needs their help, all because these providers follow religious beliefs the ACLU dislikes.

Every child deserves hope and a home. Congress should not let the ACLU steal even one more child’s chance at a happy ending.