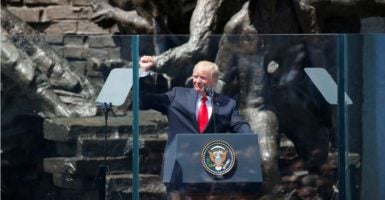 Elitists in Europe and the United States were dismissive of U.S. President Donald Trump’s address in Poland. (Photo: Laszlo Balogh/Reuters/Newscom)

There is something about a crisis and a foreign venue that brings out the best in an American president.

In June 1963, when the Berlin Wall seemed permanent and the Iron Curtain impenetrable, President John F. Kennedy traveled to West Berlin to reassure the captive peoples of Eastern and Central Europe they had not been forgotten.

In perhaps the most eloquent speech of his presidency, Kennedy proclaimed: “All free men, wherever they may live, are citizens of Berlin and therefore, as a free man, I take pride in the words ‘Ich bin ein Berliner.’”

Kennedy’s inspiring words heartened the millions living under communism behind the Iron Curtain and stiffened the resolve of the free world to challenge Soviet aggression.

In June 1987, in the 42nd year of the Cold War, President Ronald Reagan was engaged in critical negotiations about the elimination of nuclear weapons with Soviet leader Mikhail Gorbachev. He kept up the pressure on his Soviet adversary and took his freedom offensive into the heart of the evil empire.

Standing at the Brandenburg Gate in front of the Berlin Wall, Reagan directly challenged the Kremlin:

Two years later, the wall that the East German communist boss Erich Honecker had boasted would stand for another 100 years was gone, its collapse caused in large part by the firm resolve of an American president.

Even so, today, when the West faces the clear and present danger of radical Islam, President Donald Trump went to Warsaw and, in a riveting address before a memorial to the anti-Nazi Warsaw Uprising of 1944, reminded Europeans of their history and their extraordinary accomplishments. Of the West, he said: “The world has never known anything like our community of nations.”

Trump spoke of “timeless traditions and customs,” of the pursuit of innovation and the discovery of new frontiers, of the rule of law that protects free speech and free expression, of “works of art that honor God,” and of “the dignity of every human life.” All these, he said, “are the priceless ties that bind us together as nations, as allies, and as a civilization.”

Clearly, the president understands that radical Islam cannot be defeated solely by bombs and bullets but by beliefs rooted in 2,500 years of Western civilization.

At the center of that civilization, the president said, are “the people, not the powerful, who have always formed the foundation of freedom and the cornerstone of our defense.” As long as we know our history, he said, “we will know how to build our future.”

Like Kennedy and Reagan before him, Trump adopted a policy of firmness toward Russia, whose president, Vladimir Putin, he was scheduled to meet the following day. He criticized Moscow for its “destabilizing” actions in Ukraine and its support of “hostile regimes” in Iran and Syria. He urged Russia to join the West “in our fight against common enemies and in defense of civilization itself.”

In support of a Western policy of peace through strength, he urged all NATO members to “meet their full and fair financial obligations,” and praised Poland for its decision to install the U.S.-tested Patriot air and missile defense system. But as the White House later acknowledged, the core theme of the speech was a defense of Western civilization.

Elitists in Europe and the United States were dismissive of Trump’s address, calling it needlessly provocative and disturbingly nationalistic and questioning whether when he urged “us all” to “fight like the Poles, for family, for freedom, for country and for God,” did he truly mean “all”?

They just don’t get it.

But the Polish people who chanted his name in Warsaw and the British people who voted to leave the EU and the Hungarian people who support their government’s decision not to admit a floodtide of refugees and the 63 million Americans who elected him president do.

They understand that from its beginning, the West has been a group of nation-states of varying political philosophies, fiercely protective of their national interests but willing, when necessary, to unite against a common enemy whether Nazi, communist, or Islamist, but unwilling to turn over the protection of those national interests to an unelected bureaucratic body like the EU or the U.N.

If that be nationalistic, Trump might say, make the most of it.

As The Wall Street Journal put it, the president outlined a nationalism “rooted in values and beliefs—the rule of law, freedom of expression, religious faith and freedom from oppressive government—that let Europe and then America rise to prominence.”

That kind of nationalism, the Journal argued, “is worth whatever it takes to preserve and protect.”