What This Supreme Court Ruling Means for the Washington Redskins, Other Brands Deemed ‘Offensive’ 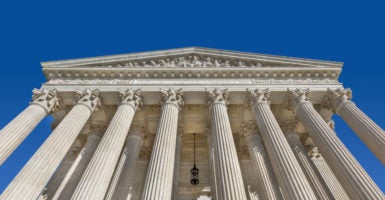 The Supreme Court ruled in a 8-0 decision that a company cannot be denied a patent simply because the government considers its trademark offensive. (Photo: iStock Photos)

Should “offensive” brand names be allowed to get a federal trademark?

The Supreme Court answered “yes” on Monday, handing a decisive win to Simon Tam and his band, The Slants.

Tam had tried to register a trademark for his band’s name, but the U.S. Patent and Trademark Office denied his application, citing a provision of the federal law known as the Lanham Act.

That provision of the law prohibits registering trademarks that “may disparage … persons, living or dead, institutions, beliefs, or national symbols, or bring them into contempt, or disrepute.”

Justice Neil Gorsuch did not participate in this decision because the case was briefed and argued before he joined the court.

The disparagement provision, Alito wrote, “offends a bedrock First Amendment principle: Speech may not be banned on the ground that it expresses ideas that offend.”

He further explained, “The proudest boast of our free speech jurisprudence is that we protect the freedom to express ‘the thought that we hate.’”

The Patent Office had argued that trademarks are a form of government speech, not private speech. When the government itself is speaking, the government can choose to favor or disfavor a particular viewpoint.

But the court rejected this argument, pointing out that slapping the government’s “seal of approval” on speech could lead to “silenc[ing] or muffl[ing] the expression of disfavored viewpoints.”

Alito asked, if trademarks are government speech, what message is it trying to convey to Americans by endorsing “Just do it, “Have it your way,” and “Think different” (trademarks held by Nike, Burger King, and Apple, respectively)?

Unlike other areas the court has recognized as government speech, trademarks are not “closely identified in the public mind” with the government.

Examples of government speech include advertisements promoting the sale of beef that were authorized by Congress and paid for by the Department of Agriculture, monuments donated to public parks, and license plates issued by states.

Alito explained that even if the Court used a relaxed standard of review for restrictions on commercial speech, the disparagement provision still violated the First Amendment.

Alito maintained that the disparagement provision is too broad:

“[It] reaches any trademark that disparages any person, group, or institution. It applies to trademarks like the following: “Down with racists,” “Down with sexists,” “Down with homophobes.” It is not an anti-discrimination clause; it is a happy-talk clause … [I]t goes much further than is necessary to serve the interest asserted.”

Justice Anthony Kennedy wrote separately on this point (joined by Justices Ruth Bader Ginsburg, Sonia Sotomayor, and Elena Kagan), explaining that they would apply heightened scrutiny and that there should not be a “blanket exemption from the First Amendment’s requirement of viewpoint discrimination” for commercial speech.

Today’s decision will have implications for another case pending in U.S. Court of Appeals for the Fourth Circuit involving the Washington Redskins, which lost six trademarks for allegedly being offensive to Native Americans in 2014.

This cancellation meant that the team would be unable to invoke federal remedies in preventing others from selling merchandise or services that use the term “Washington Redskins,” thereby depriving the business of a valuable property right.

In fact, a Washington Post poll last year found that nine in 10 Native Americans say they are not offended by the name. The Fourth Circuit put the case on hold last fall while the Supreme Court was considering The Slants’ case.

Now, the Redskins’ case should move forward. It would be hard to square a ruling against the Redskins in light of the Supreme Court’s full-throated defense of free speech.

Note: This article has been updated to clarify that the Supreme Court ruling pertains to companies seeking federal trademarks, not patents.