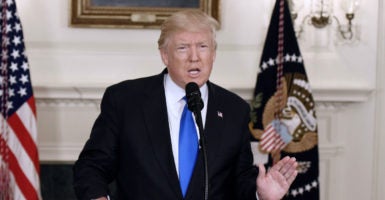 President Donald Trump called for unity after House Majority Whip Steve Scalise, R-La., was shot and wounded Wednesday morning when a man opened fire at Republican lawmakers and staff during a practice for a congressional baseball game.

“Congressman Scalise is a friend, and a very good friend. He’s a patriot and he’s a fighter,” Trump said, adding:

Later, House Speaker Paul Ryan and House Minority Leader Nancy Pelosi both made statements of common cause as Americans on the floor of the House

At least four others, including two Capitol Police officers, were wounded in the shooting that began about 7:10 a.m. at the ball field in Alexandria, Virginia, just outside Washington. Wednesday night, MedStar Washington Hospital Center listed Scalise in critical condition after surgery.

The members of Congress were preparing for the annual congressional baseball game between Republicans and Democrats,  scheduled for Thursday at Nationals Park in Washington.

In his remarks, Trump did not speculate or comment on the motive of the shooter, first reported by The Washington Post to be James T. Hodgkinson, 66, of Belleville, Illinois.

The Capitol Police saved many lives this morning from a shooter who had obviously planned to kill many Republican members. Shaken but OK…

Trump, who delivered his remarks in the Diplomatic Room of the White House, said the incident reinforces the unity of the nation’s political parties, despite differences.

“We may have our differences, but we do well, in times like these, to remember that everyone who serves in our nation’s capital is here because, above all, they love our country,” Trump said.

Ryan, R-Wis., encouraged members to pursue unity and thanked his Democrat colleagues for their support.

“My colleagues, there are so many memories from this day that we will want to forget and there are so many images that we will not want to see again,” Ryan said. “But there is one image in particular that this House should keep. And that is a photo I saw this morning of our Democratic colleagues gathered in prayer this morning after hearing the news.”

The shooting, Ryan said, is a reminder for members to focus on what is important, despite differences.

“You know, every day we come here to test and challenge each other,” Ryan said.

Ryan challenged fellow lawmakers to remember the reason they serve.

We feel so deeply about the things that we fight for and the things that we believe in. At times, our emotions can clearly get the best of us. We are all imperfect. But we do not shed our humanity when we enter this chamber. For all the noise and all the fury, we are one family.

Sen. Bernie Sanders, I-Vt., issued a statement after news outlets reported that the shooter had volunteered for Sanders’ presidential campaign.

Violence of any kind is unacceptable in our society and I condemn this action in the strongest possible terms. pic.twitter.com/hyfmmpgXML

Pelosi, D-Calif., voiced concern for her colleagues caught in the incident and thanked Capitol Police for their response.

On days like today, there are no Democrats or Republicans, only Americans united in our thoughts for the wounded. https://t.co/HcsiRCcFiP

Virginia Gov. Terry McAuliffe, a Democrat, called for increased gun control at a press conference in response to the shooting.

“Let me say this, I think we need to do more to protect all of our citizens,” McAuliffe said. “I have long advocated—this is not what today is about, but there are too many guns on the street. We lose 93 million Americans a day to gun violence.”

After a reporter questioned McAuliffe’s statistic, the Virginia governor corrected it.

Rep. Mo Brooks, R-Ala., who was present at the shooting, said it hadn’t altered his view on the Second Amendment.

“The Second Amendment right to bear arms is to ensure that we always have a republic,” Brooks said, according to the Washington Examiner.

“And as with any other constitutional provision in the Bill of Rights, there are adverse aspects to each of those rights that we enjoy as people,” he said. “And what we just saw here is one of the bad side effects of someone not exercising those rights properly.”

In his remarks, Trump asked Americans to work together.

“We can all agree that we are blessed to be Americans, that our children deserve to grow up in a nation of safety and peace, and that we are strongest when we are unified and when we work together for the common good,” the president said.