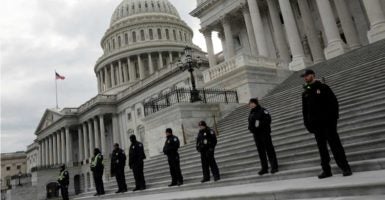 “When you’re an admin for an office, yes, you have access to everything, you’re the one providing access for others,” an IT specialist says. (Photo: Aaron P. Bernstein/Reuters/Newscom)

Congressional technology aides are baffled that data-theft allegations against four former House IT workers—who were banned from the congressional network—have largely been ignored, and they fear the integrity of sensitive high-level information.

Imran Awan and three relatives were colleagues until police banned them from computer networks at the House of Representatives after suspicion the brothers accessed congressional computers without permission.

Five Capitol Hill technology aides told The Daily Caller News Foundation’s Investigative Group that members of Congress have displayed an inexplicable and intense loyalty toward the suspects who police say victimized them. The baffled aides wonder if the suspects are blackmailing representatives based on the contents of their emails and files, to which they had full access.

“I don’t know what they have, but they have something on someone. It’s been months at this point” with no arrests, said Pat Sowers, who has managed IT for several House offices for 12 years. “Something is rotten in Denmark.”

A manager at a tech services company that works with Democratic House offices said he approached congressional offices, offering their services at one-fourth the price of Awan and his Pakistani brothers, but the members declined. At the time, he couldn’t understand why his offers were rejected but now he suspects the Awans exerted some type of leverage over members.

“There’s no question about it: If I was accused of a tenth of what these guys are accused of, they’d take me out in handcuffs that same day, and I’d never work again,” he said.

The Awans’ ban sent 20 members searching for new IT workers, but another contractor claims he’s had difficulty convincing offices to let him fill the void, even when he seemed like a shoo-in. He says he has the sense some members wrongly believed that he blew the whistle on the Awans’ theft and they were angry at him for it.

Politico reported the Awan crew is “accused of stealing equipment from members’ offices without their knowledge and committing serious, potentially illegal, violations on the House IT network.”

A House IT employee who requested anonymity said tech workers who have taken over some of those offices found that computers in some—but not all—offices were “thin clients” that sent all data to an off-site server in violation of House policies. Additionally, staffers’ iPhones were all linked to a single nongovernment iTunes account.

Awan began working for Democratic Rep. Debbie Wasserman Schultz of Florida in 2005, and his wife, his brother’s wife, and two of his brothers all appeared on the payrolls of various House Democrats soon after, payroll records show. They have collected $4 million since 2010.

For years, it was widely known that Awan, and eventually his 20-year-old brother Jamal, did the bulk of the work for various offices, while no-show employees were listed on members’ staffs in order to collect additional $165,000 salaries, workers said. This circumvented a rule that prevents any one staffer from making more than members of Congress.

Members were fiercely protective of the business despite objectively shoddy work and requests for computer help routinely ignored for weeks, all said. An IT specialist who took over an Awan office said they did not keep an inventory of what hardware was there, and the office was paying for phone lines it hadn’t used in years.

“The number of offices they had would definitely be suspicious. The loyalty [members] had [coupled with] customer service that wasn’t there,” Sowers said.

One Democratic IT staffer said Awan “would come in and only help the member — he’d tell me this  —because staff come and go. There was one staffer whose computer was broken and said ‘I’m not going to pay my invoices until you fix my computer’, and Imran went to the member, and they fired [the staffer who complained] that day. Imran has that power.”

Sowers said, “I love the Hill but to see this clear lack of concern over what appears to be a major breach bothers me. Everyone has said for years they were breaking the rules, but it’s just been a matter of time.”

An employee of a third private company with House IT office contracts, who like most of the others requested anonymity, said the Awans had more offices than anyone, yet “there’s networkers meetings once a week and I never saw them ever come to them. We have an email group; I never saw them contribute or reply.”

The investigation goes far beyond the theft of millions of dollars. The employees could read all emails dozens of members of Congress sent and received, as well as access any files members and their staff stored. Court records show the brothers ran a side business that owed $100,000 to an Iranian fugitive who has been tied to Hezbollah, and their stepmother says they often send money to Pakistan.

“When you’re an admin for an office, yes, you have access to everything, you’re the one providing access for others,” the IT specialist said.

Wasserman Schultz, the victim of a disastrous hack while she was chairman of the Democratic National Committee, renamed Awan an “adviser” to circumvent the Capitol Police’s computer network ban on the brothers. Ohio Democratic Rep. Marcia Fudge’s office told Politico a month after the ban that she had not fired Imran either.

After Wasserman Schultz and Fudge, as well as New York Democratic Reps. Gregory Meeks and Yvette Clarke and the House Democratic Caucus office, retained the Awans, the incumbents or their staffs encouraged newly elected members to place the family on their payrolls.

“You’d think in the caucus they’d know these guys were working for all of them and they couldn’t possibly support all of them. Someone must have been turning a blind eye,” the IT specialist said.

“You have the power to shut down the office, remove all their data and lock everyone out. It’s got to be a trusted adviser. How could you not see this? Maybe it’s not specifically blackmail, maybe it’s, you knew this was going on and let me do this” for years, the specialist continued.

Another Democratic IT contractor said members “are saying don’t say anything, this will all blow over if we all don’t say anything.” The Awans “had [members] in their pocket,” and “there are a lot of members who could go down over this.”