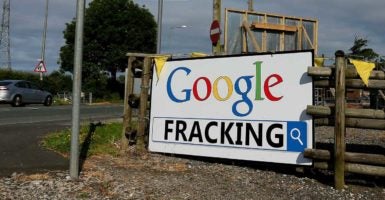 Google rewrote its search engine algorithm to bury “fake news” websites in the wake of the 2016 presidential election. Now the industry-funded Texans for Natural Gas wants Google to include anti-fracking websites.

“We believe many of the most prominent anti-fracking websites have content that is misleading, false, or offensive – if not all three,” the group wrote in an open letter to Google published Monday.

“As a result, we urge you to consider purging or demoting these websites from your algorithm, which in turn will encourage a more honest public discussion about hydraulic fracturing, and oil and natural gas development in general,” the group wrote.

Google and Facebook both were heavily criticized for allowing “fake news” to taint the presidential election.

Fracking involves injecting large amounts of water, mixed with some chemicals and sand, deep underground to unlock vast reserves of oil and natural gas. The drilling technique sparked an energy boom, but riled up environmentalists who saw it as a threat to the planet.

Texans for Natural Gas argue that environmental groups have put out plenty of false information about fracking.

The Sierra Club, for example, claims on its website that “[f]racking has contaminated the drinking water of hundreds of thousands of Americans.” It cites no evidence to back up this charge.

The Environmental Protection Agency released its final study on fracking’s impacts on groundwater in late 2016, and found no widespread evidence that fracking was contaminating groundwater.

“While the number of identified cases of drinking water contamination is small, the scientific evidence is insufficient to support estimates of the frequency of contamination,” Thomas Burke, the former deputy assistant administrator at EPA, told reporters in December.

In another example, Sierra Club Executive Director Michael Brune said fracking was harming newborn babies, pointing to a study he thought found such an association. The 2015 study in question, however, did not make that finding.

Study co-author Dr. Bruce Pitt of the University of Pittsburgh said it’s “important to stress that our study does not say that these pollutants caused the lower birth weights.”

Some environmentalists have gone even further. Sharon Wilson of Earthworks compared fracking to “rape.”

“It is a violation of justice and it is despoiling the land,” Wilson wrote in a 2015 blog post. “Victims usually suffer PTSD.”

“Claims made by the radical environmentalist campaign against hydraulic fracturing are protected by the First Amendment,” Texans for Natural Gas wrote to Google, adding:

Groups that wish to peddle misleading information about oil and natural gas are fully within their rights to do so. Many of the groups engaging in anti-fracking advocacy have devoted significant resources to Search Engine Optimization (SEO), and as a result they receive significant web traffic.

But that is no reason for Google to reward such misinformation with its powerful search engine. We urge you consider adding these groups’ websites to your review of fake news and the kinds of content that you do not wish to promote.