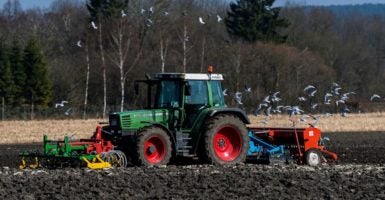 The taxpayer-subsidized “safety net” for agricultural producers represents a long-standing policy failure that would make a Soviet central planner blush.

The current “safety net” doesn’t just protect farmers from major crop losses, such as from recent snowstorms in the Midwest. Instead, it’s a system to ensure agricultural producers, primarily large agribusinesses, are given handouts when they merely don’t do as well as they had hoped.

>>> Read the report: Farms and Free Enterprise: A Blueprint for Agricultural Policy

This needs to change in the next farm bill, but it will only happen if legislators outside of the agriculture committees start to fight for a properly focused safety net. For conservatives, they should bear in mind, there’s nothing conservative about:

Thinking the Market is Bad. Agricultural interests often speak about the need to be protected from the market; many handout programs exist because of this underlying assumption. Agricultural producers should be allowed to compete in the marketplace, not insulated from having to manage ordinary business risk, such as fluctuating prices. All businesses compete, even the small mom and pop shop. There’s no reason why big agribusinesses shouldn’t compete. As conservatives know, competition is good for consumers, businesses, rewarding success, creating jobs, and promoting innovation.

Guaranteeing Revenue. If farmers have record production, they can get a government handout. If the weather is perfect for growing a crop, farmers can still receive a government handout. The reason is simple. The existing system provides handouts regardless of whether there’s any crop loss. If agricultural producers simply don’t reach revenue targets, they can get handouts. One of the new massive commodity programs protects against what is called “shallow losses.” Think about that. It’s saying that taxpayers need to guarantee that farmers receive almost all of their expected revenue, even if the dip in revenue is shallow (i.e. minor).

Ignoring Major Cost Overruns of Federal Programs. Two new major commodity programs were created in the 2014 farm bill: the Agricultural Risk Coverage and Production Loss Coverage programs. These programs are now projected to cost nearly double what was originally estimated ($32 billion instead of $18 billion over their first five years). Is Congress trying to address this? Nope. In fact, there was a concern that Congress was going to increase the costs of these programs by about $1 billion a year in the appropriations process.

Subsidizing Foreign Agriculture. Between 2010 and 2013, the U.S. taxpayer paid the Brazilian cotton industry $500 million. In 2014, the U.S. agreed to pay Brazil another $300 million. Why? Because our subsidies for cotton are trade-distorting; we have policies that we don’t want other countries to have, and Brazil properly decided to take action by going to the World Trade Organization, which agreed our cotton subsidies were trade-distorting. The new program that was designed just for cotton in the 2014 farm bill could very well be problematic too, but Brazil decided not to challenge it as part of the 2014 settlement agreement (at least through late 2018).

Controlling Supply. It’s 2017 and yet the U.S. still has policies in which the federal government centrally plans certain agricultural markets by limiting supply. The U.S. sugar program is the best example. By limiting supply, the government is able to drive up sugar prices. Not surprisingly, U.S. sugar prices have frequently been double the world price. This, of course, hurts consumers, with an estimated cost to consumers of about $3.5 billion a year.

Developing Policy Based on “Feelings.” Conservatives rightfully criticize liberals for developing policies based on feelings, not on facts. Too many self-proclaimed “conservatives” can be criticized on the same grounds with respect to the agricultural “safety net.”

Agricultural special interests encourage such emotionalism when they argue we need existing subsidies to help struggling small farmers; this presumably will lead to warm feelings for farmers. They say this knowing that subsidies go primarily to large agribusinesses. Commercial farms, which are 10 percent of all farms, received 70 percent of government commodity payments in 2015 and 78 percent of federal crop insurance indemnities.

Agricultural special interests also turn to scare tactics, not economics, when they claim that without subsidies there would be a national security crisis. They can’t point, however, to even a single case anywhere in the world where a security crisis arose because large agribusinesses didn’t get the subsidies as they wanted.

Actually, there’s an excellent example showing just the opposite: the benefits of removing virtually all subsidies. That is New Zealand. Its agricultural sector has flourished since major reforms in the 1980s. The Federated Farmers of New Zealand declared that they “are proud of their independence and are determined never again to be dependent upon government subsidies.”

Conservatives believe in markets, freedom, and individual liberty. They oppose central planning and crushing regulatory burdens. Basically, they believe in everything that current agricultural policy isn’t. Conservatives need to be proactive in the next farm bill, and remove the extensive federal intervention in farming and ranching. They need to develop a farm bill that is consistent with conservative principles, not maintaining the status quo that is the very antithesis of what they say they believe.