While the Left Ignores Voter Fraud, More Evidence Mounts to Prove Them Wrong 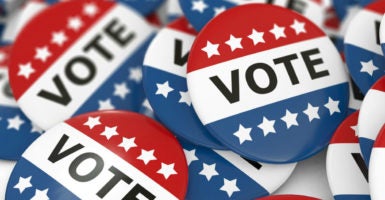 The 2016 elections have passed, but courts still have plenty of work to do sorting out cases of voter fraud throughout the country.

Convictions have continued to roll in this spring, and The Heritage Foundation’s voter fraud database is growing longer by the day.

This week, we are adding 19 convictions, including cases from Texas, Colorado, and Illinois. These are just the latest convictions. Yet despite the overwhelming evidence, the left prefers to bury its head in the sand and refuses to acknowledge the reality of Voter fraud.

Take one example from Kansas. When Kansas Secretary of State Kris Kobach claimed his first conviction in a voter fraud case against a non-U.S. citizen, opponents of the conviction had no interest in dealing with the facts.

Instead, some groups on the left—like the liberal news site Think Progress—accused Kobach of “voter suppression.” Another Salon article completely dismissed Kobach without addressing the evidence he found, saying, “Someday he’ll have evidence of a problem that doesn’t exist.”

In many states, voter registration requires proof of citizenship. The left calls such policies anti-American. But is that really such a radical idea, that voters in a U.S. election would have to be U.S. citizens?

If liberals want evidence, then Heritage has it. To date, we have documented 773 confirmed criminal convictions in 492 voter fraud cases spanning 44 states.

Here are a few of the newest entries to the database:

After a two-year investigation into local voting fraud, hidden camera footage surfaced revealing a uniformed and on-the-job Olvera “negotiating an exchange of money for mail-in voter lists.” Olvera is scheduled to be sentenced on May 25.

The crime is a Class 3 felony. Kidd was sentenced to 12 days in the St. Clair County Jail and is now barred from engaging in campaign-related activities or electioneering.

Simply put, in most states there are few measures in place to sufficiently verify the identity of those casting absentee ballots. Signatures can be forged—a problem that can be addressed by requiring the voter to include a photocopied valid ID along with the absentee ballot.

But more robust identification requirements would only solve part of the problem. They cannot defend against the pernicious targeting of absentee voters by pressuring, coercing, or “assisting” them in filling out their ballots in order to assure that particular candidates or causes prevail.

So long as states continue to allow the names of deceased voters and residents who have moved away to remain on their voter rolls, they are leaving the door wide open to fraudsters who are willing to take advantage of the system by voting in their names.

The Heritage Foundation published “Does Your Vote Count?,” a guide to help voters and policymakers understand the issue of election fraud. That report provides policy recommendations that states should adopt to help thwart illegal activity and ensure that the election process remains free and fair for all.

Procedures that can be implemented include requiring a photographic, government-issued ID and proof of citizenship to register to vote. In addition, participating in an interstate voter registration crosscheck program will help guarantee that people are not voting twice.

Secretaries of state should verify voter registration data with other state and federal agencies, such as the state Department of Motor Vehicles and the Social Security Administration. Such measures will offer a barrier of protection not only to eligible voters, but also to the electoral process in general.

A single fraudulent vote does more than just cancel out the vote of another American. It puts a stain on the results of the entire election.

If voters are discouraged to participate in what they perceive as a tainted process, it only empowers those who would seek to steal elections.

Instead of vilifying those who fulfill their duties to protect the electoral process, the left should embrace the facts. Voter fraud is real, and we must take seriously the task of securing the integrity of our elections.