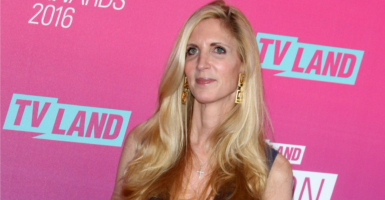 “UC Berkeley officials say they were ‘unable to find a safe and suitable’ venue for the right-wing provocateur who was invited to speak by campus Republicans on April 27,” the AP report added.

This shouldn’t be acceptable.

UC Berkeley canceled Yiannopoulos’ Feb. 1 speech. The level of violence and destruction that greeted Yiannopoulos—who was rightly condemned shortly after the Berkeley violence for remarks he made months earlier about teens, adults, and sexual relationships—was astonishing. Just look at these pictures: A worker surveys damage to a vandalized Starbucks after a protest turned violent at U.C. Berkeley over a scheduled speech by Milo Yiannopoulos in Berkeley, California. (Photo: Stephen Lam/Reuters/Newscom) Eddy Brock, who says he is a free speech advocate and was attacked by demonstrators protesting Yiannopoulos, holds his injured head. (Photo: Noah Berger/EPA/Newscom)

A light stand is set on fire during the protest at the University of California, Berkeley campus against speaker Milo Yiannopoulos. (Photo: Jeremy Breningstall/ZumaPress/Newscom)

No doubt it’s quite a headache for a university to figure out how to cope with thugs who are willing to act like this, just because they want someone silenced. Although the fact that UC Berkeley appears to have arrested only one person in the aftermath of the protests suggests a lack of seriousness about holding protesters accountable for their actions.

(Update: In an email to me received after publication, Sgt. Sabrina Reich, a public information officer at University of California, Berkeley Police Department, wrote: “To date, there have been two arrests and one student is facing school discipline … but the investigative efforts continue.”)

The point is, no college should reward violent protesters by refusing to allow controversial speakers to appear.

Because this isn’t really about Coulter or Yiannopoulos or author Charles Murray, who was greeted by violent protests when he arrived to speak to Middlebury College in Vermont.

I acceded to Berkeley's every silly demand (never made of lib speakers). Called their bluff & they canceled anyway. https://t.co/EQsiAEWPpW

Instructing Berkeley student group to spare no expense in renting my speaking venue – part of my legal damages. https://t.co/EQsiAEWPpW

It’s about whether we as a society protect free speech—or not.

Yes, free speech can make some people, including college students, feel sad or threatened or dozens of other unpleasant emotions.

But it can also force them to realize a new insight or perspective that might challenge their values, might make them re-think their views on a certain issue. Or sometimes it works the other way: The weakness of the opposition’s argument makes someone surer that her own perspective is right.

Regardless, if we believe in a reason-driven society—one where arguments, not violence, drive our perspective—we need to allow a diversity of voices to communicate their views. We need to let people, hopefully guided by reason and a good education, to decide what they think is right—not force them, by silencing some perspectives, to adopt a certain viewpoint by default.

College students, like all Americans, deserve a chance to hear a variety of views—and then make up their own minds.

Once, colleges understood that. But U.C. Berkeley’s decision here suggests that at least this university is prioritizing some views over others.