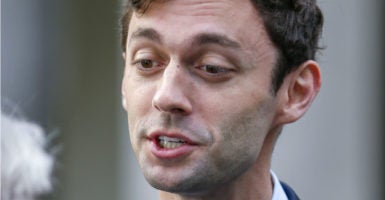 The Democrat challenger in the race to fill the seat of former Rep. Tom Price, R-Ga., is Jon Ossoff, a former congressional aide and a filmmaker. (Photo: Erik S. Lesser/EPA/Newscom)

Two candidates, Republican Karen Handel and Democrat Jon Ossoff, will compete in a runoff election in June after failing to garner 50 percent of the vote in Tuesday’s special election in Georgia’s 6th District.

The contenders in Tuesday’s jungle primary included 11 Republicans, five Democrats, and two independents. Voters will head back to the polls on June 20 to determine the winner between the top vote-getters.

Ossoff, who finished with 48 percent of the vote, is a former congressional aide and a filmmaker, while Handel, the top Republican in the field with 20 percent, previously served as Georgia’s secretary of state.

In November, Donald Trump won Georgia’s 6th District by fewer than 2 percentage points. The seat opened in February when Rep. Tom Price, R-Ga., was confirmed as secretary of health and human services.

Price’s seat has been held by Republicans for nearly 40 years since former House Speaker Newt Gingrich won it in 1978.

Ossoff, the Democrat, ran on a platform that included calls for health care reform, civil rights, provisions for environmental protection, and support for Planned Parenthood.

“Washington right now is at its most divisive, most dangerous, most potentially destructive place in modern American history,” Ossoff said in a campaign ad. “This is our first chance to make a statement about who we are and what we stand for.”

Ossoff, who grew up in Georgia’s 6th District, does not currently reside in the area he is running to represent, The Washington Post reports.

“I’ve been living with my girlfriend, Alicia, for 12 years now down by Emory University where she’s a full-time medical student,” Ossoff said. “As soon as she concludes her medical training, I’ll be 10 minutes back up the street in the district where I grew up.”

Handel, the Republican, ran on a platform that included calls to repeal and replace Obamacare, support for pro-life issues, as well as backing “a simpler, fairer, tax code that promotes economic growth” and “securing our borders.”

Trump did not endorse any of the 11 Republican candidates, but did ask voters to oppose Ossoff.

Trump also recorded a robocall that warned voters of the implications of an Ossoff win.

“Only you can stop the super liberal Democrats and Nancy Pelosi’s group, and in particular, Jon Ossoff,” Trump said. “If you don’t vote … Ossoff will raise your taxes, destroy your health care, and flood our country with illegal immigrants.”

Trump does not see the Georgia race as a “referendum” on his presidency, White House spokesperson Sarah Huckabee Sanders said Tuesday, The Washington Post reports.

“I wouldn’t use the word referendum.” Sanders said. “I think [Trump] hopes to have a Republican elected to that seat, and hopefully it will be someone to follow in Tom Price’s footsteps and be a leader from that district.”

A Georgia political operative told The Daily Signal in an interview that “Georgia is still a red state, despite Democrats hoping it will turn blue.”

“Trying to say this is going to be some bellwether for future House races is a stretch,” the operative added. “Democrats have tried to use that narrative unsuccessfully before.”

The operative explained that it is common practice in Georgia for Democrat voters to rally around a single Democrat candidate, while Republican voters prefer to choose from a large pool of candidates.

“Democrats coalesced around their candidate pretty early, and what Republicans tend to do in Georgia is the opposite,” the operative said. “We always have a very diverse field.”