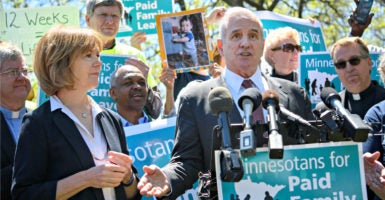 ST. PAUL, Minn.—State lawmakers want Minnesota Gov. Mark Dayton’s administration to explain its apparent faith in a politically connected union despite evidence of fraud since the union won an election to represent thousands of residents who care for disabled relatives in their homes.

State Rep. Marion O’Neill, chairman of the Subcommittee on Employee Relations, plans to schedule a hearing to ask the head of Minnesota’s labor relations agency to detail how an affiliate of the Service Employees International Union recruited home caregivers and the state administered the election.

“I want to see how many [ballots] they actually did send out, and I want to see the original receipts for the mailing,” O’Neill told The Daily Signal in a phone interview.

“I want to see copies of the returned ballots,” she said. “I want to see who signed them and verify that those signatures are authentic, and not fabricated and not forged.”

Thousands of home caregivers now seek to decertify the union.

And before state legislators vote yea or nay on a new contract with SEIU Healthcare Minnesota, O’Neill and others are asking the Dayton administration to answer some hard questions about allegations of voter fraud that potentially violate state and federal law.

In 11 affidavits obtained by The Daily Signal, caregivers—known as personal care assistants—allege that SEIU Healthcare Minnesota signed them up and deducted union dues from their Medicaid-funded paychecks without their permission.

The Daily Signal previously reported the experiences of two of these personal care assistants, Mary Barton (not her real name) and Patricia Johansen.

>>> She Never Joined a Union. But Union Fees Got Deducted From Her Paycheck.

“From where I’m sitting, there is a massive problem with transparency and there is fraudulent activity,” O’Neill said at a press conference in St. Paul last month.

O’Neill, a Republican from Buffalo, said the state Bureau of Mediation Services, run by Dayton appointee Josh Tilsen for six years, should be able to show that a 2014 unionization election for personal care assistants was on the up and up.

O’Neill said she was skeptical that the bureau fulfilled its obligation to mail out ballots to the estimated 27,000 personal care assistants who were eligible to vote on choosing SEIU.

O’Neill also asked Minnesota’s veteran legislative auditor since 1983 to probe the union election and the caregivers’ allegations of fraud.

In the 2014 election, held by mail-in ballot, they were asked whether they wanted to join SEIU Healthcare Minnesota and pay dues to the union as their representative.

Of 5,849 PCAs who participated, 3,543 voted yes and 2,306 voted no, according to the Bureau of Mediation Services. Under Minnesota law, SEIU needed only a majority of those who mailed in a ballot to vote yes.

Reports of irregularities in the election and union recruiting surfaced over the following two years. Several PCAs who spoke with The Daily Signal in St. Paul last month said they didn’t receive a ballot in the mail.

Now, SEIU Healthcare Minnesota has ratified and submitted a new two-year contract to the 10-member Subcommittee on Employee Relations, a joint panel of the Minnesota House and Senate that O’Neill leads. That pact is scheduled to go into effect July 1.

Under state law, union contracts submitted to the subcommittee when the Legislature is not in session automatically become law after 30 days if the panel doesn’t take action.

But with the Legislature in session until May 22, O’Neill said, the full House and Senate will have to vote in favor of the contract for it to take effect.

Although Dayton is a Democrat, Republicans control both houses.

O’Neill told The Daily Signal in a phone interview that Tilsen ought to be able to help her get to the bottom of discrepancies cited by the personal care assistants who seek a new election to decertify SEIU Healthcare Minnesota.

“This is going to be a public hearing, so anyone can come in and speak in favor or against the bill to renew the [SEIU] contract,” the lawmaker said. “I would like for the SEIU to come in and give their side.”

O’Neill said she encouraged Dayton to send representatives besides Tilsen, a veteran mediator. His agency oversees and administers union elections in Minnesota, and SEIU Healthcare Minnesota is not shy about lobbying the governor:

In the 2010 and 2014 election cycles, Dayton received a total of $13,500 from SEIU and $17,500 from the American Federation of State, County and Municipal Employees, or AFSCME, according to public records available at FollowtheMoney.org.

Neither SEIU Healthcare Minnesota nor the national organization has responded to The Daily Signal’s multiple requests for comment since last month, nor have spokesmen for Dayton and Tilsen, a member of the governor’s Cabinet.

Douglas Seaton, a Minneapolis lawyer, is pursuing litigation against the Dayton administration on behalf of seven personal care assistants who allege fraud in the election and union recruiting afterward.

Seaton recruited volunteers to collect nearly 10,000 signatures to trigger a new election on retaining or decertifying the SEIU affiliate. His plaintiffs and the volunteers are part of a group called Minnesota Personal Care Assistants, or MNPCA, that wants to oust SEIU Healthcare Minnesota.

Joining the effort is Matt Patterson, executive director of the Center for Worker Freedom, a Washington-based nonprofit affiliated with Americans for Tax Reform.

The Bureau of Mediation Services stipulates that those seeking the new election must collect signatures from 30 percent of the 27,000 personal care assistants. This means organizers of the petition drive must obtain 9,000 signatures; they have more than 6,500 so far—more than the total number who voted in 2014, and about twice the number who voted in favor of SEIU.

Seaton would like to see documentation that the union collected 9,000 valid signatures for the original election. He said he will take the case to the Minnesota Court of Appeals if Tilsen’s agency declines to reconsider the coalition’s petition for a new election, which it rejected last fall.

The caregivers group asked the agency to reconsider based on the growing number of signatures. After more than six weeks, the bureau has not issued a decision.

The Bureau of Mediation Services also resisted turning over a list of the 27,000 personal care assistants eligible to sign a form authorizing an election. The state agency relented, though, when the Ramsey District Court ordered it last fall to release the list.

The Dayton administration appealed, but must comply with the court order in the meantime.

Seaton described the released list as “very defective and very different,” saying some names don’t match up with PCAs or addresses, or weren’t on the original list of caregivers.

Under the Dayton administration, the Bureau of Mediation Services played a “shell game” with names and addresses of PCAs throughout Minnesota, Seaton said during a March 4 press conference in St. Paul:

First, they refused to give us the list entirely and then, after many court appearances, we finally got the list, but it’s like playing football where they change the rules every quarter. Just a month ago, we received a new list where they said this is really the list we should be using.

And it had 5,000 PCAs on it we never had any contact with before, and who were never described as being part of the bargaining unit. We believe this is a stonewall operation the governor is running, to prevent this election from taking place.

O’Neill wrote Tilsen on March 14 to request that he attend a Subcommittee on Employee Relations hearing probing the fraud allegations, which probably will be held next month. Also signing the letter was state Sen. Michelle Benson, a Republican subcommittee member from Ham Lake who also is deputy majority leader.

In the letter to the agency head, O’Neill and Benson say they have seen “troubling” evidence of “fraudulent signatures, nonexistent voters, and ballot tampering” produced by the protesting personal care assistants. They tell Tilsen:

These documents, and additional follow-up information we have received, indicate that your office has dismissed the decertification petition, despite your receipt of what we understand is now more than 6,300 signed PCA election authorization cards, more than the total of PCAs who actually voted on either side in the original 2014 election.

Additionally, we have been told that you have refused to disclose the original SEIU authorization cards or documents from 2014, or to investigate the possible fraudulent signatures, nonexistent voters, and ballot tampering, which correspondence and affidavits suggest may have occurred.

Canvassers stop by Cedars of Edina apartment complex, where a man listed by the state as a union member doesn’t live. #SEIU #MarkDayton pic.twitter.com/SnB7bqjO0u

The dispute has its roots in a 2013 bill, signed into law by Dayton, that classified personal care assistants as public employees for the purposes of collective bargaining.

At the time, Democrats were the majority in the Legislature. The state House narrowly passed the bill, 68-66, as did the Senate, 35-32.

The next year, SEIU—which hailed the new law—held the mail-in election to unionize PCAs.

“This law is a completely partisan law,” O’Neill told reporters at the press conference, adding:

From where I’m sitting, there is a massive problem with transparency and there is fraudulent activity. “From where I’m sitting, there is a massive problem with transparency and there is fraudulent activity,” state Rep. Marion O’Neill says. (Photo: Minnesota House of Representatives)

O’Neill asked James Nobles, the legislative auditor, to try to determine whether the agency mailed ballots to all 27,000 PCAs, and whether forgery occurred with any signatures on forms authorizing the election or on the mail-in ballots.

“If these records don’t exist, then we are talking about the destruction of government records, which would be horrendous,” the lawmaker said.

A tentative new labor contract normally would not be submitted to O’Neill’s subcommittee until just prior to its expected effective date. The fact that SEIU submitted a contract so early aroused suspicion among O’Neill and other Republican lawmakers.

Initially, the state and the union permitted Seaton, the PCAs’ lawyer, to attend negotiations between SEIU and Minnesota’s management and budget agency over the new contract. They later closed the meetings to him.

“We believe the contract was submitted when it was to outflank the decertification election and to prevent the election from taking place,” Seaton told The Daily Signal, adding:

Now that the contract must come before the subcommittee and the full Legislature, we hope they will not move forward with a new contract while there is a pending dispute over a decertification election.