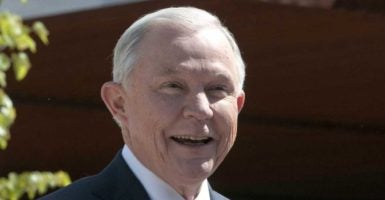 “We hear you and we have your back.”

That is the message Attorney General Jeff Sessions shared with Customs and Border Protection personnel in Nogales, Arizona, on the U.S. southern border Tuesday.

In a speech Tuesday, Sessions announced five changes to immigration prosecution and enforcement:

In addition to these prosecution adjustments, Sessions announced several other changes to the Department of Justice and its nationwide offices.

Sessions said that “each U.S. attorney’s office, whether on the border or interior, will designate an assistant United States attorney as the border security coordinator for their district.”

In an effort to reduce the backlog of illegal immigration cases, Sessions said, “We will put 50 more immigration judges on the bench this year and 75 next year.”

Praising President Donald Trump’s efforts to make immigration enforcement a priority, Sessions cited that in March of this year “we saw a 72 percent drop [in illegal crossings] compared to the month before the president was inaugurated.” He added, “That’s the lowest monthly figure for at least 17 years.”

Sessions made it very clear that these policies will be strictly enforced, saying, “For those that continue to seek improper and illegal entry into this country, be forewarned: This is a new era. This is the Trump era.”