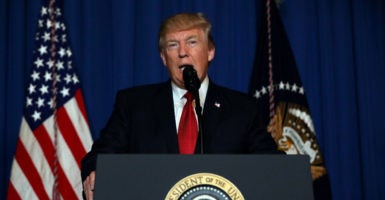 President Donald Trump addresses the nation Thursday night in Florida, after ordering an attack against the Syrian air base believed to have been used to launch a sarin gas attack against civilians. (Photo: Carlos Barria/Reuters/Newscom)

On Thursday, President Donald Trump ordered the launch of 59 Tomahawk cruise missiles against an airfield in Syria.

The strike came in response to Tuesday’s chemical weapons attack ordered by Bashar Assad against the rebel-held town of Khan Sheikhoun in northwestern Syria.

Trump immediately condemned that attack, which reportedly killed 80 people, including men, woman, and infant children. The target he selected for last night’s strike was the airfield used to launch that very attack.

The strategic impact of this tactical move is hard to overstate.

The deterrent effect of this attack for Assad’s use of chemical weapons is clear, but the bigger message is global. This was Trump’s first big step in re-establishing the meaning of American presence, America’s word, and the general respect for American power in the eyes of nations, friend and foe.

Many here in the United States are worried about the escalation in tensions this attack might bring about in the world. But whether you are confronting a playground bully or a rogue nation, you have to be willing to accept risk to protect the things you hold dear.

Bullies may fight back when they are confronted because they won’t willingly give up their power. But refusing to stand up to them simply means you are choosing to live under their rules.

It doesn’t matter what your name is, or whether you have a powerfully protective family or network of friends that will shield you from such confrontations. You have to be willing to step into the breech and accept the associated risk if you want to chart your own destiny.

Elect to run, and you’ll be running for the rest of your life. Choose to hold your ground, and you’ll establish a level of confidence and strength that will make even the worst of actors think twice about challenging the lines you draw in the sand.

Trump’s decision last night drew a line in the sand. It changed the atmosphere across the entire globe and affected the conversations taking place right now in cities like Pyongyang, Moscow, and Beijing—and of course, at Mar-a-Lago.

It put the world on notice that the repercussions for challenging the word or the wherewithal of the United States is no longer limited to stern rhetoric, and that a debilitating, kinetic response can come swiftly and often without warning.