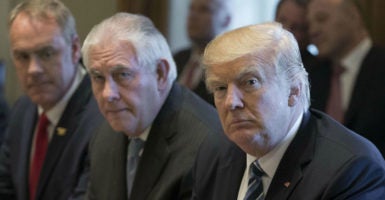 According to the Kemp-Kasten Amendment, which has been regularly attached to foreign appropriations bills since 1985, the president has the authority to withhold federal funding from any organization that “supports or participates in the management of a program of coercive abortion or involuntary sterilization.”

On April 3, a State Department memo announced that the U.S. will do just that.

During the Reagan and both Bush administrations, the Kemp-Kasten Amendment was invoked and the U.S. withheld funding from the United Nations Population Fund due to its continued support for and participation in the Chinese government’s coercive family planning practices, which include forced abortion and involuntary sterilization.

The Clinton and Obama administrations made no such determinations, so during their time in office the United States sent hundreds of millions of dollars to the fund.

Americans should celebrate the Trump administration’s decision to change course.

Taxpayers should not be forced to fund an organization that continually partners with a government entity that subjects the Chinese people to disturbing human rights abuses under the guise of “family planning.”

For over three decades, China has subjected its citizens to a one-child policy (in recent years expanded to a two-child policy). Enforcement mechanisms include mandatory pregnancy screenings, crippling fines for exceeding the allowable number of children, detainment, termination from one’s job, forced abortion, and forced sterilization.

It is tragic and unacceptable that the Chinese government continues to trample the rights of its citizens through coercive family planning programs while partnering with the United Nations Population Fund.

Now that the Trump administration has ended U.S. funding for the United Nations Population Fund, it should pursue other diplomatic means to address human rights abuses under China’s family planning programs and work toward ending, once and for all, China’s forcible population control policies.