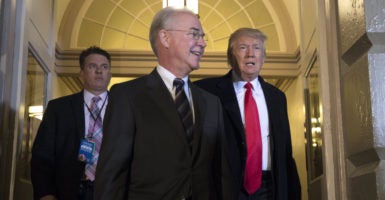 Health and Human Services Secretary Tom Price, left, and President Donald Trump, right, have been negotiating with members of the conservative House Freedom Caucus over the House GOP's health care bill. Freedom Caucus members are heading to the White House to meet with the president ahead of Thursday's vote. (Photo: Jim Lo Scalzo/EPA/Newscom)

The House is scheduled to vote on the Obamacare repeal health care bill some time today, but GOP leaders are still struggling to get conservatives and centrist Republicans on board.

House Speaker Paul Ryan and President Donald Trump are working both sides of the Republican conference in an attempt to get them closer to supporting the bill.

Trump and White House officials have been courting the conservative House Freedom Caucus, while Ryan met with centrists in a closed-door meeting Wednesday night.

Ryan initially said the regulations couldn’t be rolled back in the bill because of Senate rules. But last night, leaders seemed open to making changes to the bill giving conservatives what they wanted.

Their softening, though, came as centrist Republicans slowly started announcing their own opposition ahead of today’s likely vote.

Reps. Charlie Dent, R-Pa., and Jaime Herrera Beutler, R-Wash., were the latest to do so.

“In the final analysis, this bill falls short,” Herrera Beutler said in a statement this morning. “We can’t give up on repealing Obamacare with a solution that provides affordable, high-quality health care to all Americans. I will remain active and engaged at every step until Congress gets this right.”

Instead, all eyes appear to be on the White House, where Trump will meet with Freedom Caucus members at 11:30 a.m. this morning to further negotiate the details of the bill.

Before the meeting, the president spoke to individual Freedom Caucus members by phone.

Conservative lawmakers were attempting to convince Trump to repeal Obamacare’s regulations, including its essential health benefits requirements, a list of 10 services insurance plans were required to cover without copayments.

Trump and White House budget director Mick Mulvaney said Wednesday they were working with the House and Senate to eliminate the regulations.

But so far, no legislative changes to the bill have been released.

Instead, the House Rules Committee, which met late into the night Wednesday, approved a “same-day rule” along party lines that allows the House to vote for the rule and the bill the same day it is before the committee. The rule sets the parameters for debating legislation and which amendments can be considered.

Typically, the House is required to wait at least one day before it can consider a rule approved by the committee.

But by passing a same-day rule, the House can consider a rule and the underlying bill the same day it’s before the Rules Committee.

Lawmakers debated whether to pass the same-day rule on the House floor this morning, but went into recess.