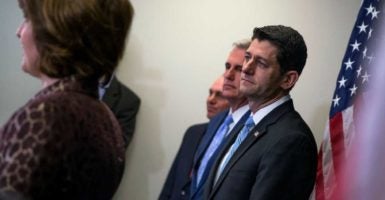 "Just because Speaker [Paul] Ryan and President [Donald] Trump say their bill is a repeal and will bring down costs, does not make it so," says a Facebook commenter. (Photo: Shawn Thew/EPA/Newscom)

Constituents of several conservative lawmakers are speaking up because they view the Republican health care replacement as too similar to the Affordable Care Act.

“A large majority of constituents contacting Congressman [Jim] Jordan about [the American Health Care Act] are opposed to it,” said Darin Miller, a spokesman for Jordan, R-Ohio. Jordan was formerly chairman of the House Freedom Caucus, a group of conservative lawmakers.

“They want him to fulfill the promise of repealing Obamacare and replacing it with legislation that reduces premiums and is patient- and doctor-centered, not Washington-centered,” added Miller.

Alexei Woltornist, the communications director for Rep. Warren Davidson, R-Ohio, told The Daily Signal the congressman has received almost no phone calls from constituents in favor of the American Health Care Act.

“Last I checked the count, we received almost 300 calls opposed and only one in favor,” said Woltornist.

After White House press secretary Sean Spicer claimed Republican legislators would “pay a price at home” if they did not vote for the American Health Care Act, Alyssa Farah, the communications director for current House Freedom Caucus Chairman Mark Meadows tweeted that the North Carolina GOP congressman’s phone had been “ringing off the hook” with constituents calling to thank him for his opposition against the Republican health care bill.

Mark Meadows’ phones have been ringing off the hook w/calls thanking him 4 his stance. (Despite ads run against him)https://t.co/kiy3AV3neu

The vast majority of comments from Meadows’ supporters on his Facebook page also voice opposition to the GOP’s health care bill.

One commenter, Cheryl from Asheville, North Carolina, responded to Meadows’ post about his opposition to the American Health Care Act by saying, “Thank you for voting NO. Please continue to look at all of the aspects of the [American Health Care Act], and please pay special attention to how this impacts our most vulnerable populations—the elderly and those chronic disabilities and conditions that prevent them from working.”

Tina, another commenter on Meadows’ Facebook post, said, “Your dedication to keeping your promise of full repeal to ease the burdens from Obamacare for the American public is the best. Just because Speaker [Paul] Ryan and President [Donald] Trump say their bill is a repeal and will bring down costs, does not make it so. Your conviction to stand against party leadership is commendable.”

Rep. Thomas Massie, R-Ky., said he received 275 phone calls from constituents advocating opposition of what he calls “Obamacare Lite,” and only four calls in support of the American Health Care Act.

275 oppose vs 4 support #ObamaCareLite. Phone calls to my office from constituents over last two weeks. Why are we voting on this?

“The House Freedom Caucus knows they have the support of the major conservative groups: FreedomWorks, Club for Growth, Americans for Prosperity, Heritage Action, and Tea Party Patriots—along with our activists,” Brandon said.

“We brought a thousand people from around the country in person to support members of the House Freedom Caucus and other members working hard to keep their campaign promises,” he added.