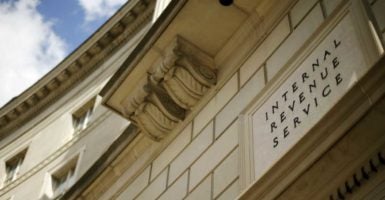 An obscure bureaucratic policy that allowed IRS officials to target conservative and tea party tax-exemption applicants during the 2010 and 2012 election campaigns is still in place, meaning the same abuses may be continuing, according to a nonprofit government watchdog.

The federal tax agency’s policy requires IRS officials to stop processing tax-exempt applications that are “likely to attract media or congressional attention,” the Cause of Action Institute said in a report made public Wednesday.

The policy also directs IRS officials to prepare “sensitive case reports” for their supervisors and to ignore “the merits of the application” if it involves a newsworthy topic.

“Targeting was—and is—IRS policy, not a violation of it,” the report said, noting that the policy is still in place. “As a result, American taxpayers are at risk for similar treatment in the future.”

“In halting the applications, preparing such reports and referring the matter to supervisors, including political appointees, IRS employees behaved exactly as agency rules dictated,” the report continued.

The IRS delayed hundreds of applications from conservative and tea party groups beginning in 2010. A federal court recently ruled the IRS is still targeting groups using the policy.

The policy “automatically politicizes the process in an attempt to avoid potential embarrassment,” according to the report. Partisan officials can use the “vague and open-ended” policy “to selectively delay and obstruct those applications receiving higher scrutiny without a way to hold the officials accountable for their decisions.”

“Issues that attract ‘media or congressional attention’ are usually political in nature, and reliance on such a criterion means that the process itself cannot avoid partisan bias,” the report continued, noting low-level employees could delay tax-exempt applications after watching a single TV news story.

The application was passed up the chain of command until supervisors determined to hold it until Washington managers decided how to proceed.

“This same procedure was followed in the numerous tea party applications that followed,” the report said. “In most of those matters, the higher-level decision on how to proceed would not come for several years.”

Cause of Action Institute noted that “one theme was consistent” while the original case was passed around among managers—“concern about media attention,” the report said. “Five separate levels of management cited that concern specifically, including the reference to potential embarrassment, while no mention at all was made of workload concerns, novel legal questions, or other similar rationales.”

The targeting became more elaborate over the following months, and the agency created “be on the lookout” lists ordering officials to hold all “tea party” or “patriot” applications.

Regardless, the IRS hasn’t changed its policy, even after an inspector general report, five in-depth congressional reports, and extensive news coverage.

“Seven years after the targeting scandal began, the rule that enabled this inexcusable behavior still exists,” the report said. “Until that rule is removed from the internal manual used by all IRS employees, targeting of political opponents will remain a very real threat.”

Cause of Action Institute noted that the IRS has the authority to change its policy without legislation.

“Given the amount of criticism the IRS has received regarding its targeting practices, it is hard to believe the agency has not yet taken the steps needed to remedy the problem,” the report said.