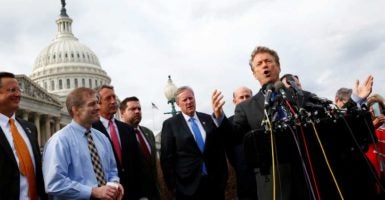 Sen. Rand Paul, R-Ky., and other members of the House Freedom Caucus hold a news conference in the District of Columbia. (Photo: Eric Thayer/Reuters/Newscom)

A group of conservative lawmakers gathered Wednesday to criticize the Obamacare replacement plan offered by House Republican leadership, a bill one of them, Sen. Rand Paul, dubbed “Obamacare lite.”

Paul was referring to House Speaker Paul Ryan’s championship of the American Health Care Act as the way to repeal and replace Obamacare.

At the FreedomWorks “Day of Action” rally on Capitol Hill to oppose the legislation, the Kentucky Republican said, “We don’t want anything to do with Obamacare subsidies, taxes, [or] mandates.”

Paul went after health insurance companies and the idea of them getting a “bailout” from taxpayers.

Paul also claimed that insurance companies, under the proposed GOP health care law, tell small business owners to “kiss my boots, take it or leave it.”

“When the premiums continue to rise, the government will continue to pay you money to pay the insurance compan[ies] … this is not about you, this is about reimbursing a billion-dollar insurance industry,” he said.

In a reversal, Ryan told reporters late Wednesday that he realizes changes need to be made to the legislation to clear the House, not to mention the Senate.

“Now that we have our score … we can make some necessary improvements and refinements to the bill,” Ryan said, according to The Washington Post, referring to the Congressional Budget Office’s report Monday on the costs and effects of the House GOP’s plan.

Cruz said that if Republicans don’t repeal Obamacare completely while they are in power, they will be “rightly considered a laughingstock.” He said the American Health Care Act has “a lot of problems.”

Cruz noted recent meetings with President Donald Trump, Vice President Mike Pence, senators, and House members, and said: “The test for a Republican repeal of Obamacare is to bring down premiums and make health care more affordable. … We can do that, but only if we repeal the Obamacare mandates.”

Brat, who represents Virginia’s 7th Congressional District, said, “When you say you’re going to repeal Obamacare, does that mean the federal government is still in charge of your health care?”

“First we make government bigger, then we promise you free markets later,” Brat said of the House leadership’s plan.

“The Freedom Caucus is here to make sure that those forgotten men and women … know that we are here to stand with them, to make sure to take back this country, for the Constitution, for our God, and for our freedom,” said Meadows, chairman of the caucus of conservative House members.

Because of outspoken opposition to the Obamacare replacement plan from conservative activists and organizations, Meadows said, lawmakers were starting to work on legislation that “really repeals and really replaces Obamacare.”

Paul and Jordan introduced bills in their respective chambers that are identical to the Obamacare repeal legislation that Congress passed in 2015 but President Barack Obama vetoed in January 2016.

Jordan, a former Freedom Caucus chairman, continued on the theme of keeping promises, saying, “Our job isn’t not to offend.”

“Our job is real simple: Do what we told the voters we were going to do,” the Ohio Republican said.

“It’s a revolution … we’re gonna have to offend somebody,” he said.