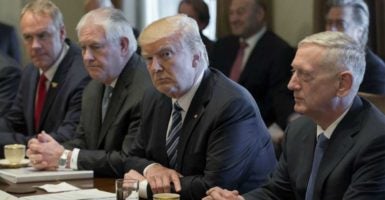 "We have four empty seats, which is a terrible thing," President Donald Trump said at a Cabinet meeting Monday. (Photo: Michael Reynolds/SIPA/Newscom)

During his Cabinet meeting Monday, President Donald Trump opened by saying, “We have four empty seats, which is a terrible thing.”

Trump said it’s “because the Senate Democrats are continuing to obstruct the confirmation of our nominees,” the administration is lacking secretaries of labor and agriculture, a director of national intelligence, and a U.S. trade representative.

“The main victim of this very partisan obstruction is the American public,” Trump said.

However, it’s the absence of more than 500 deputy secretaries and assistant secretaries, ambassadors, and commissioners that could put the implementation of Trump’s agenda at risk, some conservatives fear.

“Senate Democrats are continuing to obstruct the confirmation of our nominees,” @POTUS says.

“Assistant Cabinet secretaries and such are as important as the Cabinet, period, because they pretty much run the government,” Don Devine, the former director of the Office of Personnel Management under President Ronald Reagan, told The Daily Signal in a phone interview. “The Cabinet secretaries are the face of the agencies that talk to reporters and speak to the public.”

Senate Democrats are obstructing confirmations, Devine said, but Trump could move on nominations and the Senate Republican leadership could aggressively push more through.

“Clearly, the Senate leadership is trying to preserve the role of a consensus body, unlike the House,” Devine said. “Trump should just give the Senate too much, and they would have to vote for a slew of nominees. It’s a lost cause to try to continue the Senate as a consensus body.”

The Senate has confirmed 19 of Trump’s nominees, mostly Cabinet secretaries.

Trump has nominated 23 other sub-Cabinet positions and other political appointees that are still awaiting a confirmation vote, according to the Partnership for Public Service, a nonpartisan research group. Still, the president hasn’t submitted nominees for 511 of the 553 political appointments that require Senate confirmation. The Republican-controlled Senate has been in session for 37 days in 2017, as of Tuesday, according to Congress.gov. There were only four weeks this year when the Senate was in session for more than three days.

Democrats can extend debate for 30 hours per nominee under Senate rules. But, Republicans could keep the Senate in session to make them exhaust their debate, said Al Regnery, a conservative author and former Justice Department lawyer.

>>>Democrats Don’t Have Votes to Defeat Trump Nominees, but They Can Delay Them

“You could keep the Senate in session for a few days and make them extend their debate to 30 hours for nominees, if that is the Democrats’ only recourse,” Regnery told The Daily Signal in a phone interview. “After the few times, the Democrats wouldn’t keep doing this.”

The White House said the blame for this slow pace lies entirely with Senate Democrats.

“This isn’t a Republican issue. I mean it’s not Republicans that are playing beat-the-clock on a lot of these nominees, and we’ve discussed this since the transition time,” White House press secretary Sean Spicer told The Daily Signal during a press briefing last week.

“There were several nominees that, frankly, weren’t even considered controversial by the standards of Senate Democratic leadership, and yet have been held up over and over again,” Spicer continued. “That’s a very different scenario than going back and being with constituents, which was on the Senate schedule. So I don’t think that’s a synonymous thing.”

“If the majority were serious about this, they could keep the Senate in session,” Dunlop told The Daily Signal. “The Democrats are holding things up, but the majority leader is culpable.”

McConnell’s office referred The Daily Signal to a statement from McConnell in a March 9 interview with Politico:

And you know, we have hordes of people come to Washington on one cause or another. I—protesting doesn’t bother me in the least. I think everybody’s got a right to do that. I do think Senate Democrats preventing the administration from functioning is very hard to explain and I think it is a reaction to the protesters. They’re saying, ‘Okay, we’re going to take resistance out of the streets and right into the Senate, and try to prevent the Trump administration from even functioning.’

In some cases, Dunlop said, the Cabinet secretaries should be in place before deputy and under secretaries are named. In other cases, executive branch employees that aren’t Trump supporters are moving slowly on background investigations of nominees and potential nominees, Dunlop said.

This is one instance where conservatives should hope for federal positions to be filled, Dunlop said, considering the massive number of career bureaucrats—some who burrowed into the system from political jobs in the Obama administration—that oppose implementing Trump’s agenda.

“There are 3,000 to 4,000 political jobs to fill,” she said. “He needs to fill those positions with everyone who is willing to eliminate their own job.”

John DeStefano, a former political director for House Speaker John Boehner, runs the Office of Presidential Personnel. But, Trump should work to get a director of Office of Personnel Management in place, Devine said.

“It’s a significant handicap to not have an OPM director organizing between the White House and the departments,” Devine said.