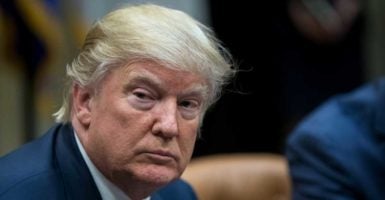 President Donald Trump this week threw his support behind a House Republican plan aimed at repealing and replacing Obamacare. While it’s not yet to the liking of everyone in his party, a health care proposal was a key pledge candidate Trump said would be part of his first 100 days in office.

“The president is bullish on trade,” @haferre45 says.

Now, at the halfway mark of this critical period on Friday—the president has moved at a quick pace addressing the bulk of promised executive actions and proposals—such as taking early steps on border security and increased vetting of immigrants and refugees from Middle Eastern countries.

But there are still significant actions left to make and measures that haven’t been proposed in Congress in this crucial 100-day timeline.

“He was very clear in his joint address to Congress, he’s not the president of the world, he’s the president of the United States of America, and he’s really shown it in the first 50 days as far as where his priorities are,” Ferre told The Daily Signal in a Facebook Live interview at the White House Friday.

Here’s a look at Trump’s promises at the halfway point.

Trump promised six measures in the first 100 days to “clean up corruption and special interest collusion in Washington, D.C.”

The first measure on the list is unfulfilled, which is the one that requires the most effort.

Trump has not proposed—or at least hasn’t backed an existing proposal—for a constitutional amendment to impose term limits on members of Congress. Sens. Ted Cruz, R-Texas, and Mike Lee, R-Utah, have backed term limit proposals, but the White House hasn’t thrown its weight behind the proposition yet. A constitutional amendment requires the vote of two-thirds of Congress to pass then must be ratified by three-quarters of the states before becoming law.

Trump’s other measures to clean up Washington only required executive actions, which he moved on.

Trump almost immediately made good on a pledge to impose a hiring freeze on federal employees to reduce the federal workforce through attrition.

The president also signed an executive order requiring that for every new federal regulation, two existing regulations must be eliminated.

Trump made seven promises about protecting the jobs of American workers—which was a central focus of his campaign.

He has withdrawn from the Trans-Pacific Partnership, a trade deal President Barack Obama entered with 11 countries, but one that was never approved by Congress.

Trump pledged to renegotiate the North American Free Trade Agreement. While there hasn’t been an executive order to that effect, Commerce Secretary Wilbur Ross said talks about NAFTA will launch later this year.

Ferre said she doesn’t have a timetable for every item that was part of the campaign’s 100-day plan. But, she said the president will address trade issues. Ferre added:

The president is bullish on trade, he wants to promote trade, but through bilateral trade agreements to make sure that we are getting a better bang for the buck. NAFTA for example, yes, let’s have good, robust trade with Mexico, but let’s make sure that this treaty that was negotiated over 20 years ago is still where it needs to be to address the needs of the American voters in 2017. I don’t know if it will necessarily be within the next 50 days, but the president has been very clear this is one of the trade issues that needs to be addressed. He took out the Pacific trade agreement because it was one that didn’t benefit American workers and really put some other countries at a greater advantage than American workers.

Trump has not yet directed Treasury Secretary Steven Mnuchin to label China a currency manipulator, and according to a news report, might be less likely to do so. Mnuchin said in late February that the U.S. will continue to use the existing criteria for judging whether China manipulates its currency.

Trump has also promised to lift restrictions on the production of American energy reserves. The White House has put this forward as part of its broader energy goals, but the White House hasn’t passed an executive order or formally backed legislation to this effect. Trump also has not moved to cancel payments to the United Nations climate change programs.

Trump signed an executive order to approve construction of the Keystone and Dakota Access pipelines. Authorizing Keystone construction was part of his 100-day plan.

In another presidential memorandum, Trump directed departments and agencies to support expanded manufacturing through streamlining permitting reviews and reducing regulations.

Restoring Security and Rule of Law

Trump vowed to “cancel every unconstitutional executive action” by Obama. He hasn’t moved back every Obama executive action yet, including Deferred Action for Childhood Arrivals, or DACA, a program that shields children of illegal immigrants from deportation.

Trump did nominate 10th U.S. Circuit Court of Appeals Judge Neil Gorsuch to fill the seat of the late Supreme Court Justice Antonin Scalia. During the campaign, Trump pledged to begin the process of replacing Scalia with a constitutionalist.

On Jan. 25, Trump signed a series of executive orders regarding immigration, his signature issue during the campaign. One order called for “immediate construction of a physical wall on the southern border, monitored and supported by adequate personnel so as to prevent illegal immigration, drug and human trafficking, and acts of terrorism.”

He also signed an order scaling back funding for “sanctuary cities,” the term for municipalities that refuse to cooperate with federal officials in enforcing immigration law.

The most controversial Trump initiative has been suspending immigration from seven Middle Eastern countries that have been designated hotbeds for terrorism. The first executive order, issued on Jan. 27, was struck down by a Washington state U.S. district judge, and the 9th U.S. Circuit Court of Appeals upheld the ruling.

Trump issued a second executive order that identifies only six countries and clarifies other aspects of the first order regarding visas and dual citizenship. On Thursday, Hawaii became the first state to sue over the revised executive order. The Trump administration said it will continue to defend the original executive order.

Trump promised to promote an economic plan to grow the economy by 4 percent per year, adding 25 million new jobs, according to his 100-day plan. That would include an across-the-board tax cut. Under his plan, the middle-class earners would get a 35 percent tax cut, while the number of tax brackets would be reduced from seven to three. Trump proposed lowering the business tax rate from 35 percent to 15 percent.

Trump hasn’t yet pushed a formal proposal to allow Americans to deduct child and elderly care from their taxes.

Meanwhile, Trump administration officials seem open to a border adjustment tax to prevent companies from laying off American workers for overseas tax breaks, then selling their products back into the United States. However, the “End Offshoring Act” named in his plan hasn’t been formally proposed.

Trump’s budget blueprint also addressed other legislative proposals included in the 100-day plan, such as rebuilding the military. The fiscal plan calls for a $54 billion hike in military spending, to be paid for by cuts to discretionary spending and foreign aid.

During his address to a joint session of Congress, Trump also talked about his proposal for a $1 trillion infrastructure program to be funded through federal and private sector money.

The Trump campaign also listed the “Restoring Community Safety Act,” as a legislative goal, to boost resources for federal law enforcement. While a bill hasn’t come forward, Trump took actions on two priorities of the proposal in executive actions.

He issued an executive order directing the attorney general to establish a task force on reducing crime and increasing public safety, and issued another executive order to “strengthen enforcement of federal law to thwart transnational criminal organizations” such as gangs, cartels, and racketeers.