Hawaii Has No Case Against Revised Travel Executive Order 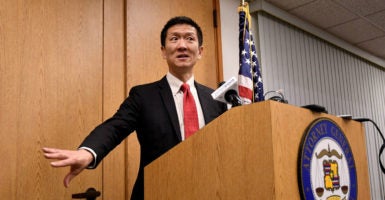 Executive Order 13780, “Protecting the Nation From Foreign Terrorist Entry into the United States,” imposes a 90-day suspension of entry from six terrorist safe havens in the Middle East and Africa until the administration is assured that our vetting procedures are sufficient to prevent dangerous aliens from getting into our country.

The order doesn’t apply to any foreigners who have already been granted a visa or permission to be in the country, such as permanent, resident aliens.

It also repeats the 120-day temporary suspension of refugee admissions for the same reason: to ensure we have sufficient vetting to stop what has happened in the past in the U.S. and has been happening in Europe in terms of terrorists successfully using the refugee process to get into the European Union.

Hawaii’s lawsuit consists almost entirely of policy arguments as opposed to legal claims, and the legal claims that are made are far-fetched.

There seems little doubt that the lawsuit was filed in Hawaii to take advantage of the generally liberal nature of the 9th U.S. Circuit Court of Appeals and its dominance by Democratic appointees. Seventy-two percent of the judges on that court were appointed by Democratic presidents, and at the district court level in Hawaii, the lawsuit has been assigned to Judge Derrick Watson, a President Barack Obama appointee.

The complaint attacks the president for issuing an order that prevents “immediate family members living in affected countries” from visiting their relatives in the United States, claiming that it will also prevent “universities, employers, and other institutions” from being able to “recruit or to welcome qualified individuals from the six designated countries.”

The basic legal flaw in all of this is that foreign aliens, whether they have family in the U.S. or not, have no constitutional right to enter the country. Neither universities, employers, nor other institutions have any constitutional right to recruit foreign aliens for jobs or positions except to the extent that Congress, which has plenary power over immigration, allows them to do so.

The complaint does at least acknowledge that Congress gave the president plenary power, in 8 U.S.C. §1182(f), to suspend the entry of any aliens into the country if he believes their entry would be “detrimental” to the United States. However, the complaint claims the president’s order “exceeds” his authority under this statute.

But given its broad grant of authority, it is hard to imagine how the president could possibly be exceeding his authority.

That is particularly true given the fact that the revised order explicitly states how the six designated countries are connected to the terrorism problem we face.

Three of the countries—Iran, Syria, and Sudan—are listed by the State Department as official sponsors of terrorism, while the other three—Libya, Somalia, and Yemen—were listed as “countries of concern” because of their terrorism problems by Jeh Johnson, homeland security secretary under Obama.

None of this matters to Hawaii, which claims that these countries were chosen only in order to discriminate against the Muslim religion, a claim that cannot be supported by the facts or the plain terms of the executive order.

After all, there are approximately 50 countries in the world with a majority Muslim population, yet entry from all of those countries with the exception of these six is not restricted or affected in any way by this revised executive order.

Instead of making rational, legal arguments, this complaint reads like a press release and makes outrageous claims, such as comparing this revised executive order to “the Chinese Exclusion acts and the imposition of martial law and Japanese internment after the bombing of Pearl Harbor.”

In fact, there are only seven pages of legal claims within the entire 38-page complaint.

The complaint also makes another basic error: It tries to fault the administration and claim some nefarious purpose behind the fact that these six countries were chosen and not other countries “whose nationals have perpetrated fatal terrorist attacks in the United States.”

That stands in contrast to the working relationships we have with the government, military, and intelligence services of other countries such as Pakistan and Saudi Arabia, which makes vetting their citizens more reliable.

By the way, given all of the concern that Hawaii expresses in this complaint for visitors, immigrants, and refugees, it is ironic to note that according to the Office of Refugee Resettlement of the U.S. Department of Health and Human Services, Hawaii only took in a grand total of seven refugees in fiscal year 2015 out of the almost 70,000 taken into the U.S.

None were from the six countries affected by the executive order. Only the very liberal and “compassionate” District of Columbia took in fewer refugees—five—that year.

In addition to the state of Hawaii, the complaint was filed on behalf of Ismail Elshikh, the imam of the Muslim Association of Hawaii. His main claim is that because of the executive order, his mother, who is a Syrian national, will be prevented from “obtaining a visa to visit or reunite with her family in Hawaii.”

Yet the complaint admits that the last time she visited was in 2005. Given that, it seems contrived to base a claim of constitutional harm on an application for a visa being possibly delayed for another 90 days after a 12-year absence.

And, of course, the revised executive order does allow for case-by-case waivers by the secretary of state and the secretary of homeland security in appropriate circumstances, including when a “foreign national seeks to enter the United States to visit or reside with a close family member … ”

There are a series of cases upholding the authority of the federal government to suspend visa entry. These include Knauff v. Shaughnessy (1950), in which the U.S. Supreme Court upheld the exclusion without a hearing or any other form of due process of the alien war bride of an American citizen because her entry was considered detrimental to the interests of the U.S.

Not only was this held to be constitutional, but the Supreme Court said that it was not within the province of any court “to review the determination of the political branch of the Government to exclude a given alien.”

Moreover, the admission of aliens into this country is not a right, but a privilege. The supposed “due process” rights of any such alien are limited to the “procedures authorized by Congress.”

The complaint even raises the First Amendment, claiming that Trump’s order violates the Establishment Clause. The facts don’t support that claim since this executive order does not discriminate on the basis of religion.

But more importantly, the Supreme Court said in 1972 in Kleindienst v. Mandel, an alien exclusion case, that it would not review the reasons for the executive’s determination “nor test it by balancing its justification against the First Amendment.”

This lawsuit appears to be a public relations exercise masquerading as a legal claim. If the Hawaii District Court or the 9th Circuit rule against this order, it will be another example of the courts ignoring the law and prior precedent.

Trump’s revised executive order is both legal and reasonable. It balances the need for national security and protecting the safety of the American public with the compassion we show in our welcoming of immigrants and visitors from all over the world.