Only 3% of NBC and CBS Reports Depict Trump Positively 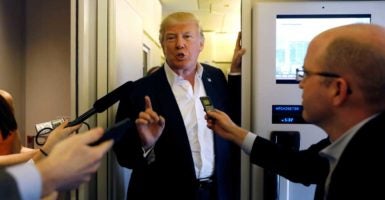 A mere 3 percent of reports about President Donald Trump that aired on NBC and CBS nightly news were positive, according to analysis by the nonpartisan press research firm Media Tenor.

The report found 43 percent of stories on NBC and CBS about Trump were negative, while another 54 percent of reports were considered neutral.

The firm made its determination by watching 370 news stories about Trump on all three channels between Jan. 20 and Feb. 17 of this year.

A previous analysis by Media Tenor concluded Democratic presidential candidate Hillary Clinton received better press treatment than Trump, with 49 percent of reports about her being positive after she obtained enough delegates to clinch her party’s nomination.

Another study conducted by the conservative Media Research Center concluded that 91 percent of the election coverage of Trump on broadcast news channels was negative.

A majority of Americans seem to agree with Spicer.

Roughly 51 percent of Americans thought the press was too critical of the new president, according to a NBC News/Wall Street Journal poll published earlier this week. Only 41 percent thought that the press had been mostly fair and objective in their coverage of Trump.