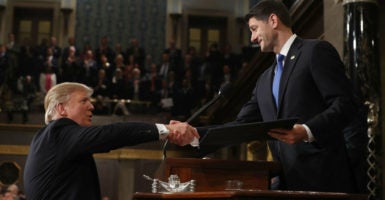 “I was pleased to hear President Trump address many issues critical to everyday Americans, such as job creation, tax reform, national security, supporting our military and veterans, and improving addiction treatment services,” Scott said in a statement, adding:

The president made a strong call for the principles that will guide the replacement of Obamacare. I look forward to passing legislation that repeals Obamacare and builds a sustainable system for all American families.

“That was a home run,” Ryan said. “President Trump delivered a bold, optimistic message to the American people.”

Ryan also said that Congress and the White House are on the same page in their stance on Obamacare.

“Obamacare is one of the biggest challenges that the American people face,” Ryan said. “Congress and the White House are united in our promise to repeal Obamacare and replace it with a patient-centered system.”

That was a home run. Here is my statement on @POTUS #JointAddress to Congress: https://t.co/JXwyBq1aHx pic.twitter.com/sDYHBmAbHo

“The vast majority of people in the country have been hurt by Obamacare,” Cruz said Tuesday morning in an interview with MSNBC and tweeted his support for full repeal of Obamacare during the joint address.

We should honor the promise we made to the American People — #FullRepeal of Obamacare. #Jointsession

“We have undertaken a historic effort to massively reduce job-crushing regulations, creating a deregulation task force inside of every government agency; imposing a new rule which mandates that for every one new regulation, two old regulations must be eliminated; and stopping a regulation that threatens the future and livelihoods of our great coal miners,” Trump said in the address.

Rep. Diane Black, R-Tenn., who also serves as chairman of the House Budget Committee, said she is excited to see Trump putting actions behind his words.

.@realDonaldTrump's words tonight were encouraging – and already, he is matching those words with meaningful action. #JointAddress pic.twitter.com/rcK47TvjZb

See my statement in response to @POTUS #JointAddress to Congress. https://t.co/PUfRJ7kONd

“I support the president’s efforts to rebuild our military and protect our communities,” Brat said. “As Congress considers spending levels, the firewall between defense and discretionary spending must be torn down. I believe our men and women in uniform must have the capabilities to defend our country against current and future threats.”

Trump told Congress Tuesday night that “ … to keep America safe we must provide the men and women of the United States military with the tools they need to prevent war and—if they must—to fight and to win.”

My statement on the President's speech https://t.co/fFLx14hn9k #NE02

“I applaud the president for his bold vision and for his message of national unity,” Bacon said. “I also look forward to working with this administration, and with congressional colleagues on both side of the aisle to renew our belief in America’s spirit so that we can guarantee our future generations the same opportunities that have been the hallmark of American greatness for over two centuries.”

“We have a fundamental task,” Jordan tweeted. “Do what the voters sent us here [to] do.”

We have a fundamental task: Do what the voters sent us here 2 do. President Trump understands that, and it’s time 4 all of us 2 get 2 work.

Democrats also commented on the speech.

“I loved the presidential tone,” Manchin said. “The tone was good. It was exactly what we needed to hear.”

“We must recognize our undocumented immigrants deserve the dignity of a pathway to citizenship,” Pelosi said.

We must recognize our undocumented immigrants deserve the dignity of a pathway to citizenship. #JointSession