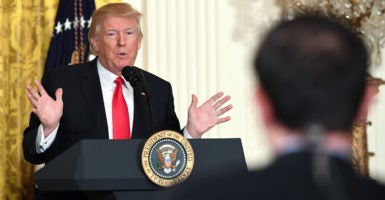 President Donald Trump went toe-to-toe with the media at a White House press conference Thursday, using terms such as “fake news” and “failing” to describe many of the recent stories about his administration.

“I turn on the TV, open the newspapers, and I see stories of chaos, chaos,” Trump said. “Yet it is the exact opposite. This administration is running like a fine-tuned machine, despite the fact that I can’t get my Cabinet approved.”

He also said, “In other words, the media’s trying to attack our administration because they know we are following through on pledges that we made and they’re not happy about it for whatever reason.”

During the press conference, CNN’s Jim Acosta asked, “Aren’t you concerned, sir, that you are undermining the people’s faith in the First Amendment, freedom of the press, the press in this country, when you call stories you don’t like ‘fake news?’”

It’s so important to the public to get an honest press. The press—the public doesn’t believe you people anymore. Now, maybe I had something to do with that. I don’t know. But they don’t believe you.

Trump said, “I mean, you have a lower approval rate than Congress. I think that’s right.”

Trump singled out CNN more than any other news outlet, saying, “I mean, I watch CNN, it’s so much anger and hatred and just the hatred.”

Trump responded, “Ask [CNN President] Jeff Zucker how he got his job. OK?”

This not a laughing matter. I’m sorry, delegitimizing the press is unAmerican

However, Jeff Mason, the president of the White House Correspondents’ Association who covers the president for Reuters, had a more reserved view.

Reporters need a chance to ask questions, and @realDonaldTrump gave them that. The public can decide if it is happy with the answers & tone. https://t.co/URKpxMlkfj

Brent Bozell, president of the Media Research Center, a conservative media watchdog group, who has in the past been a critic of Trump, said some aspects of the press conference amused him.

The president was smart to hold a full press conference today after all the panic about the liberal media getting to ask liberal questions.

Trump isn’t playing by the liberal media’s rules. They’re melting down because he’s helping expose what little power they actually have.

Regarding the story about Trump’s recent firing of national security adviser Michael Flynn and his communication with a Russian ambassador, Trump said: “The leaks are absolutely real. The news is fake because so much of the news is fake.”

Trump went on to denounce reports that his campaign aides communicated with Russians.

“The failing New York Times wrote a big, long front-page story yesterday and it was very much discredited, as you know,” Trump said. “It was—it’s a joke, and the people mentioned in the story, I notice they were on television today saying they never even spoke to Russia. They weren’t even a part, really—I mean, they were such a minor part. They—I hadn’t spoken to them.”

“And just while you’re at it, because you mentioned this, Wall Street Journal did a story today that was almost as disgraceful as the failing New York Times’ story yesterday.”

Trump said he’s actually having fun speaking to the press:

I’m actually having a very good time, OK? … I won with news conferences and probably speeches. I certainly didn’t win by people listening to you people. That’s for sure. But I’m having a good time. Tomorrow, they will say, ‘Donald Trump rants and raves at the press.’ I’m not ranting and raving. I’m just telling you. You know, you’re dishonest people. But I’m not ranting and raving. I love this. I’m having a good time doing it.