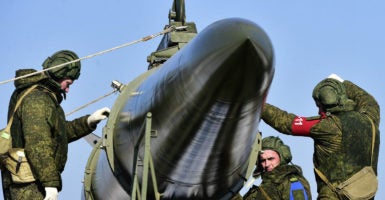 Almost right out of the gate, the Trump administration is facing its first arms control challenge from Moscow.

Russia has reportedly deployed its new cruise missile in an apparent violation of the Reagan-era Intermediate-Range Nuclear Forces Treaty, in effect since 1988.

Russia initially violated the treaty by testing the missile during Barack Obama’s presidency. Despite becoming aware of this apparent violation, the Obama administration did not take any forceful action to bring Russia back into compliance with the treaty, merely sending President Vladimir Putin a letter of concern in July of 2014.

The Obama administration was less than forthcoming in discussing challenges that the treaty violation poses for the United States and its allies. The State Department’s annual compliance reports prior to July 2014 wrongly led Americans to believe there was no reason for concern over the Intermediate-Range Nuclear Forces Treaty, even though the missile has reportedly been tested as early as 2008.

The Trump administration must do better.

The missile range limit of 500 kilometers is significant for U.S. allies in Europe situated close to the Russian borders and to Kaliningrad, a Russian enclave that borders Poland and Lithuania. The presence of Russian intermediate-range missiles would considerably complicate any U.S. efforts to defend its allies in the Baltics and Central and Eastern Europe should Russia decide to violate their territorial integrity.

Such a scenario is not as far-fetched as it might seem. Russia has a recent history of violating other nations’ sovereignty and territorial integrity. It also periodically issues nuclear threats against the North Atlantic Treaty Organization allies and conducts military exercises that simulate nuclear strikes against Poland.

For its part, Russia accuses the United States of Intermediate-Range Nuclear Forces Treaty violations. But Russian accusations are baseless. U.S. missile defense systems do not violate the treaty because the treaty itself contains an exception for them.

Neither do U.S. drones violate the treaty, as they are simply not mentioned by the treaty at all.

The Trump administration has a range of options to respond to the Russian treaty violations. Purely diplomatic measures to address the violation first begun during the Obama administration may not be sufficient.

Historically, arms control tends to limit how the United States learns about military systems and their interactions in a broader context. This is why terminating the treaty is a viable option.

Currently, Moscow is doing whatever it deems necessary to its strategic interest regardless of the treaty, while the United States continues to abide by it. The administration should not ponder any future arms control initiatives and nuclear weapons reduction agreements at least until this issue is resolved.