In 16 Reactions, How the Left Responded to Trump’s First State of the Union 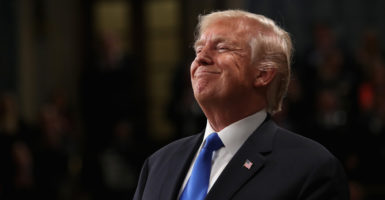 During his first State of the Union address, President Trump highlights the decrease of unemployment among the African-American population, and calls for immigration reform and a $1 trillion public-private infrastructure proposal. (Photo: Win McNamee/CNP / Polaris/Newscom)

Individuals on the left have taken to Twitter to share their displeasure with President Donald Trump’s State of the Union address.

Here are 16 of the most memorable reactions.

Church … family … police … military … the national anthem … Trump trying to call on all the tropes of 1950s-era nationalism. The goal of this speech appears to be to force the normalization of Trump on the terms of the bygone era his supporters are nostalgic for. #SOTU

Melissa R. Michelson, professor of political science at Menlo College in Atherton, California, tweeted that she was embarrassed about the chanting.

Are they seriously chanting USA?! I am embarrassed for my country #SOTU

3. A Princeton University professor of African-American studies said the address was “officially a Klan rally.”

The #SOTU is officially a Klan rally.

.@realDonaldTrump’s #SOTU performance last night was just that — a performance completely devoid of the serious policy ideas that lead to real bipartisan efforts.

After a long and divisive year, many Americans were yearning for the President to present a unifying vision for the country. Unfortunately, his #SOTU address stoked the fires of division instead of bringing us closer together. #AYearOfTrump

Sen. Joe Manchin, D-W.Va., tried to give a standing ovation at one point, but was apparently dissuaded.

Did anyone see Sen. Joe Manchin clapping and wanted to stand but looked at Chucky and the rest and decided to sit back. Folks politics is a very dangerous endeavor, it can make good men become really bad. This is it America, it more of hatred for @realDonaldTrump pic.twitter.com/cp1A362iIA

8. Sen. Kamala Harris, D-Calif., told Jake Tapper of CNN in an interview Tuesday night that members of the Congressional Black Caucus did not give a standing ovation when Trump touted that “African-American unemployment stands at the lowest rate ever recorded,” because Trump did not give credit to President Barack Obama.

There’s evil genius in rebranding “family reunification” to the dehumanizing, infestation-sounding “chain migration.”
See also: citizens united, which is the beautiful way to say “the rich get to own all of politics”

I already know the state of the union-ain't good. Was pretty damn good about a year and a half ago.

12. Liberal filmmaker Michael Moore said he wasn’t going to watch the State of the Union and called Trump a liar.

13. Actor Jeffrey Wright said he “can’t even” watch it, just like Moore.

Can't even watch this vile, deceitful fraud and his bizarre cult of self-interested sycophants. #SOTU #Click

14. Unlike Moore and Wright, Elizabeth Banks said she at the very least “tried” to watch it.

I tried. I listened but the amount of BS and stunts and questions raised that will never be answered made me throw my remote and now I am listening to Tom Petty and am a better American for it. #SOTU

15. Actor Mark Ruffalo took his rage out on Trump and Wall Street.

We stand with working people, not Wall Street. We need an infrastructure plan to create millions of jobs, not corporate wealth. #TrumpSellsOut #SOTU