Here Are 10 Priorities for Betsy DeVos 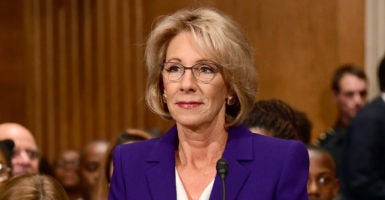 Education Secretary Betsy DeVos was confirmed by the Senate in a historic 51-50 vote on Tuesday, Feb. 7, 2017. (Photo: Ron Sachs /dpa/picture-alliance/Newscom)

After weeks of protest and feet-dragging from the left and special interest groups, the Senate on Tuesday finally confirmed Betsy DeVos as education secretary.

Now in her new role, DeVos will have an opportunity to work with Congress to advance education choice as appropriate, to limit federal intervention in education, and to reform higher education in a way that creates options for students and lowers costs.

Here are 10 reforms DeVos should work to achieve in conjunction with Congress and the new administration:

The highly successful D.C. Opportunity Scholarship Program, which provides vouchers to low-income children to attend a private school of choice, should not only be supported through reauthorization and full funding, but also be expanded to enable more children living in the district to participate.

2. Expand choice in the District of Columbia.

>>>For a full explanation of each proposal, read Lindsey Burke’s report.

Native American children attend such low-quality schools that Politico ran a piece titled “How Washington Created Some of the Worst Schools in America.”

Bureau of Indian Education schools are unique among K-12 government-run schools because the funding for these schools is almost entirely federal. They are directly funded through a combination of Department of Interior, Department of Education, and Department of Agriculture funds, with the bureau itself operating one-third of the schools and the other two-thirds being tribally operated.

No student should be trapped in a failing school because of their ZIP code. Parents of students who attend Bureau of Indian Education schools should be made eligible for education savings accounts to pay for private school tuition, online learning, special education services and therapies, curricula, textbooks, and a host of other education-related services, products, and providers.

5. Transform Title I into a student-centered support system.

Complex Title I funding formulas dictate how the government allocates resources for low-income children. These formulas should be consolidated and streamlined to use a straightforward set per pupil allocation.

States should then be given the opportunity to let students use Title I funding to pay for local college classes, public and private school courses, online courses (public and private), SAT prep courses, and a host of other education-related services and courses.

Across the country, states have led the way in expanding education choice options for families. DeVos and federal policymakers can support this momentum by allowing K–12 education expenses to be classified as allowable expenditures under 529 college savings plans, which are allowed to grow tax-free and insulated from federal tax penalties if put toward higher education expenses.

7. Allow states to opt out of programs under the Every Student Succeeds Act through the A-PLUS proposal.

Work with Congress to advance policies contained in the Academic Partnerships Lead Us to Success (A-PLUS) proposal, which would allow states to completely opt out of programs under the Every Student Succeeds Act and to put dollars toward any education purpose allowed under state law.

The A-PLUS approach directs educational accountability to those with the most at stake in student and school success: parents and taxpayers. This approach would also relieve the burden on states to demonstrate compliance with the myriad federal program requirements and regulations associated with the Every Student Succeeds Act, which could substantially reduce administrative costs.

State and local leaders would determine how to best allocate resources to improve educational quality, and states would no longer be constrained by the dictates of federal programs.

Formula-funded programs are larger programs whose funding is predetermined by a formula embedded in law. DeVos should work to eliminate these formula-funded programs and almost all competitive grant programs under the Every Student Succeeds Act. This would help streamline the law, stop the education spending spree, and curtail federal meddling in local school policy.

Specifically, Congress should eliminate many of the programs that fall under Titles II, III, IV, and V, as well as the Preschool Development Grants found in Title IX (established under the Every Student Succeeds Act). Many of these programs are redundant, ineffective, and perpetuate high levels of spending. President Barack Obama signs the Every Student Succeeds Act into law in December 2015, replacing over 10 years of federal education policy established by the No Child Left Behind Act. (Photo: Jonathan Ernst/Reuters/Newscom)

9. Rescind regulations under the Every Student Succeeds Act.

During the Obama administration, the Department of Education wrote regulations under the Every Student Succeeds Act that narrowed flexibility for states with regard to things like accountability indicators and reporting requirements.

These regulations were at odds with Congress’ intent, and the House of Representatives has now passed a resolution of disapproval of the accountability regulations written under the Every Student Succeeds Act.

DeVos should support Congress as it moves to rescind these new regulations is in order to bring implementation of the law into line with what Congress intended. This will bring needed relief to states from the federal mandates created through these regulations.

10. Ease the cost of college by making space for private lending.

In order to decrease loan burdens and place pressure on colleges to rein in college costs, the PLUS loan program should be eliminated. This will make way for more flexible private funding alternatives.

DeVos’ confirmation as education secretary presents her with a unique opportunity to work with Congress to scale back federal intervention in education, and to advance increased choice for parents and families when appropriate. These 10 policy priorities are a great place to start.