Grand Theft Judiciary? The Senate, the President, and the Supreme Court 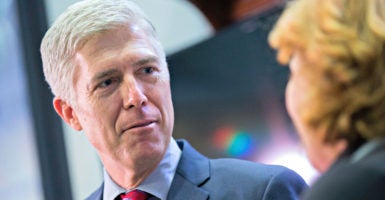 Sen. Jeff Merkley, D-Ore., recently accused his Republican colleagues of committing a “crime against our Constitution.”

This is a serious accusation, given that all senators are required to swear an oath (or affirmation) that they will “support and defend the Constitution of the United States against all enemies, foreign and domestic.”

So is it reasonable to consider what exactly Senate Republicans did to warrant such an accusation? According to Merkley, they failed to perform their “constitutional duty” by refusing to consider President Barack Obama’s nomination of Chief Judge Merrick Garland of the D.C. Circuit Court of Appeals to serve on the Supreme Court.

In short, Merkley alleges that the Grand Old Party stole a seat on the nation’s highest court from the former president.

Implicit in this charge is the assumption that the seat was the president’s to begin with.

But the ability to appoint justices to serve on the Supreme Court is no more the exclusive right of the president than it is of the Senate.

Merkley’s emphatic assertion to the contrary betrays a deeply flawed understanding of the Constitution’s Appointments Clause. Its implications also undermine constitutional tenets that have been central to ensuring the success of our 227-year-old experiment in republican self-government.

The President … shall nominate, and by and with the Advice and Consent of the Senate, shall appoint … Judges of the supreme Court.

While the Constitution grants the president exclusive power to nominate justices to serve on the Supreme Court, it simultaneously requires that the Senate confirm those so nominated before the president can appoint them, something the Senate is not obligated to do.

This arrangement was no historical accident. Rather, it was a deliberate choice on the part of the framers of the Constitution.

They were well aware of the possibility that an unchecked executive could use the exclusive power of appointment to secure influence over the other branches of government. For example, royal governors wielded such power during the colonial period to reward supporters of the British crown and to punish those who dared opposed it.

During the Constitutional Convention in Philadelphia, James Madison of Virginia stated that he “considered the appointment by the Executive as a dangerous prerogative. It might give him an influence over the Judiciary department itself.”

Reflecting such concerns, Nathaniel Gorham of Massachusetts proposed instead that “Judges be appointed by the Executive with the advice and consent of the 2d. branch.”

The framers unanimously approved this arrangement on Sept. 7, 1787, as the convention was concluding its work.

I am not prepared to be complicit in the undermining of our government, writes @SenJeffMerkley https://t.co/6SJOFIPA1a pic.twitter.com/b4MGYufhTm

Commenting on the final agreement, Gouverneur Morris of Pennsylvania observed “that as the President was to nominate, there would be responsibility, and as the Senate was to concur, there would be security.”

Wherever the chief magistrate may appoint to office without control, his government may become absolute, or at least aggressive; therefore the concurrence of the senate is made requisite by our constitution.

Alexander Hamilton of New York also underscored the independent and co-equal role that the framers intended the Senate to play. Writing in Federalist 67, Hamilton pointed out that “the ordinary power of appointment is confined to the President and Senate jointly.”

Hamilton similarly argued in Federalist 76 that vesting the sole power of nomination and appointment in one person, or the president alone, would be harmful. Such harm could be avoided, according to Hamilton, by granting a co-equal role to a “different and independent body.”

In contrast, the framers clearly specified the limited instances when the president could act independently to appoint nominees. The Recess Appointments Clause gives the president the authority to “fill up all Vacancies that may happen during the Recess of the Senate.”

Separation of Powers and Judicial Independence

The doctrine of separation of powers requires that the three branches of government be separate and independent from each other.

In Federalist 51, Madison argues that such separation requires that each department “should have as little agency as possible in the appointment of the members of the others.”

Significantly, Madison observed in Federalist 47 that the British Constitution was deficient in this respect because the executive, or crown, had an undue influence over the composition of the judiciary to the extent that all of the members of the judiciary department are appointed by the king.

The implication here is “that all the appointments for the supreme executive, legislative, and judiciary magistracies should be drawn from the same fountain of authority, the people.”

A Rules-Based Strategy for Overcoming Minority Obstruction of a Supreme Court Nomination | The Heritage Foundation https://t.co/j9D3UePi0A

The Constitution stipulates that judicial appointments should be governed by a different process for two reasons.

First, the judiciary was intended to be an apolitical branch of the government. Selecting judges via popular vote would make it an inherently political branch. Second, the nature of the judicial role required “peculiar qualifications” that may not be best secured by popular election.

The Appointments Clause, by creating a joint presidential-senatorial role in the confirmation process, preserves judicial independence and the apolitical nature of the judiciary while simultaneously promoting the requisite qualifications in those nominated and confirmed. It does so by avoiding strict executive or legislative control over who is appointed to serve on the federal bench.

When viewed from this perspective, Merkley’s accusation that Senate Republicans stole a Supreme Court seat from President Obama is preposterous.

If suggesting otherwise is inconsistent with the plain meaning of the Constitution, Merkley is accusing the wrong party of a crime that he himself may be guilty of committing.