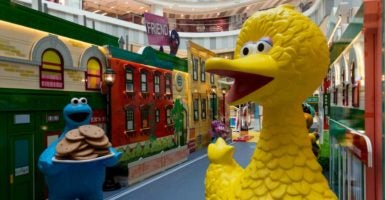 The Trump administration could eliminate funding to the Corporation for Public Broadcasting, which runs PBS and supports shows like "Sesame Street." (Photo: Sipa Asia/Sipa USA/Newscom)

Combined, the three departments cost around $741 million in 2016, making up a small part of a host of budget reforms needed to cut more than $1 trillion a year from the federal budget.

Eliminating funding to the Corporation for Public Broadcasting, which runs PBS and supports shows like “Sesame Street,” is not a new idea. Mitt Romney suggested cutting the Corporation for Public Broadcasting during the 2012 presidential campaign, and was quickly criticized. President Barack Obama even accused Romney of trying to kill Big Bird in a campaign ad.

Trump’s budget cuts align in many ways with the Republican Study Committee’s 2017 “Blueprint for a Balanced Budget,” which only makes $8.6 trillion in cuts.

“A free society should not have government-supported media outlets, especially ones that so often convey political news and opinion,” the RSC report said. “There is no shortage of media outlets and news services available to consumers,” the report said.