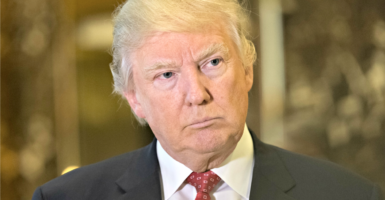 Senate committees are about to examine the Cabinet picks of President-elect Donald Trump, here speaking to reporters Jan. 9 in the lobby of Trump Tower. (Photo: Albin Lohr-Jones/UPI/ Newscom)

Donald Trump won’t be inaugurated as president until Jan. 20, but his Cabinet choices begin to face confirmation hearings in the Senate this week.

The process for Senate confirmation of top presidential appointees is outlined briefly in Article II, Section 2 of the Constitution, which guides lawmakers’ examination and approval or rejection of a president’s nominees.

This section of the Constitution famously requires that a president obtain “the Advice and Consent of the Senate” in making top government appointments. U.S. law and Senate rules also apply to the process.

Here are some general questions and answers about the process, based largely on multiple detailed reports (especially in 2012 and 2015) by the Congressional Research Service, which provides exclusive policy and legal analysis to Congress.

Who begins the confirmation process?

The president—or in this case, the president-elect—chooses individuals to fill Cabinet positions and other top posts in the executive branch.

Besides the vice president, an elected official who requires no confirmation, the White House identifies Cabinet members as the attorney general, who heads the Justice Department, and the heads of 14 other executive departments: Agriculture, Commerce, Defense, Education, Energy, Health and Human Services, Homeland Security, Housing and Urban Development, Interior, Labor, State, Transportation, Treasury, and Veterans Affairs.

The heads of other agencies also enjoy Cabinet rank and must be confirmed by the Senate along with hundreds of other top executive branch officials (detailed here). They include the ambassador to the United Nations and the U.S. trade representative, as well as the heads of the Environmental Protection Agency, the Office of Management and Budget, the Council of Economic Advisers, and the Small Business Administration.

Members of the House and Senate may suggest possible candidates for the president or president-elect’s consideration, but such recommendations generally have no official weight.

Who screens candidates for these top positions?

In preliminary screening of potential nominees, a sitting president benefits from White House offices such as Presidential Personnel and Counsel to the President.

However, an executive branch agency, the Office of Government Ethics, offers an array of services and publications to assist a presidential transition team such as Trump’s—as well as individual nominees.

The FBI and the Internal Revenue Service also review a potential or formal candidate’s personal, political, and financial backgrounds.

The FBI typically does a background investigation and submits a report. The Office of Government Ethics, along with an ethics official from the relevant agency, reviews financial disclosures. If they find conflicts of interest, they may work with the candidate to “mitigate” the conflicts.

What happens in the Senate?

The Senate’s executive clerk refers the president or president-elect’s formal choice to the appropriate committee (sometimes committees) overseeing the executive branch department in question, such as State or Defense.

In the Congressional Research Service’s 2012 report, author Maeve Carey characterizes this as a crucial step:

The decision by a committee to report a nomination is critical: To be considered on the Senate floor, the nomination must have been reported from the committee of jurisdiction or all senators must agree to its consideration.

Committee members and staff review the various forms sent along with the candidate’s name and gather more in-depth information as they choose.

Opponents and supporters of the nominee often submit letters summarizing their views to the committee. The committee chairman schedules a hearing, during which each member of the panel may ask questions or make points.

For a committee to vote on reporting the nominee to the full Senate for a confirmation vote, a majority of members must be “physically present.”

A committee may decline to act on a nomination at several points—after receiving it, after investigating the nominee, or after holding one or more hearings.

The committee has three options in voting to send a nomination to the full Senate: Report it favorably, unfavorably, or without recommendation.

Once a nominee clears a committee, with or without a recommendation, the Senate majority leader may schedule a confirmation vote on the chamber’s executive calendar.

If a committee declines to report a nomination, it is still possible in certain cases for the Senate to bring the nomination to the floor for a vote.

How many votes does it take to confirm?

“Most presidential appointees are confirmed routinely by the Senate, without public debate,” Carey and Henry Hogue write in the 2015 report from the Congressional Research Service, adding:

Other appointees receive more attention from Congress and the media through hearings, investigations, and floor debate. Historically, the Senate has shown particular interest in the nominee’s views and how they are likely to affect public policy.

Opposition from one or more senators may prevent a floor vote on a nomination that has come out of committee, because the rules require “unanimous consent” to consider and confirm a nomination.

If a nominee faces substantial opposition, the Senate majority leader may wish to end debate through a procedure called cloture. Under it, a simple majority of senators voting—normally 51—is able to limit debate to 30 hours and advance the nominee to a floor vote.

After the Nov. 8 elections, when they lost two seats, Republicans now have 52 seats in the Senate to the Democrats’ 46 (two Independents caucus with the Democrats).

It used to require 60 votes, not 51, to proceed to a floor vote until Senate Democrats changed the rules in 2013, except in cases of nominations to the Supreme Court.

A simple majority vote also is required to confirm, or approve, the nomination.

The confirmation process is fluid and open to adjustments, the Congressional Research Service notes. For a change to be adopted, however, a senator must propose it and the chamber must unanimously agree.