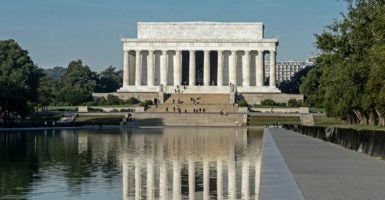 Organizers of the Women's March on Washington say they knew from "Day One" that they would not be able to use the Lincoln Memorial for their protest. (Photo: Harry M. Walker/Newscom)

Organizers of the Women’s March on Washington denied reports that they were “barred from protesting Donald Trump’s inauguration,” as one left-wing outlet put it, maintaining that thus far, they’ve been treated fairly by federal officials in charge of distributing permits.

“There’s been some confusion,” Tamika Mallory, a co-chair of the Women’s March on Washington, told The Daily Signal in a phone interview. “We haven’t gotten denied from the Lincoln Memorial—we’ve been told from Day One that the Lincoln Memorial was not an option.”

Mallory was responding to rumors that spread among left-leaning news outlets, suggesting federal officials, along with Trump’s inaugural committee, were blocking the public from protesting the day after Trump’s inauguration.

“Trump gets to decide where in DC groups can protest his inauguration—if at all,” read another headline on ThinkProgress.

The allegations spread after a lawyer from Partnership for Civil Justice Fund who is representing the liberal ANSWER Coalition claimed the National Park Service and the inauguration committee were intentionally preventing groups from demonstrating over inauguration weekend.

“This is an extraordinary land grab,” Mara Verheyden-Hilliard told The Washington Post. “It’s having, I think, the intended stifling effect. It’s having a distinctive negative on people’s ability to organize.”

But Mallory, the Women’s March organizer who has experience organizing public protests in her work with a number of civil rights groups, said to date, “all of the agencies have been cooperating with us.”

The National Park Service requests that groups of 25 or more looking to rally in the nation’s capital apply for a First Amendment Permit.

According to The Washington Post, the National Park Service does not grant permits for inauguration weekend “until the Presidential Inaugural Committee, which plans the parade and other events to usher in a new president, maps out where it wants to hold inauguration-related activities.”

Mallory appeared to be familiar with this process, having recognized early on that the Lincoln Memorial was “not an option” for their march.

The Lincoln Memorial, Mallory said, was an idea floated by the original founders of the March on Washington, who had no experience organizing an event of this nature.

“Grassroots didn’t know the process, had never organized anything like this before. But this was not possible for many reasons,” she said.

Last Friday, the group announced it had secured a location “near the Capitol” to hold its rally.

The idea for the march, which was initially named the “Million Women March,” traces back to a grandmother in Hawaii. Mallory told The Daily Signal that on Election Day, after emailing 40 of her friends, the event went viral and thousands of women signaled a desire to attend.

But soon after, the founders of the march found themselves under attack for having no experience organizing a march of this kind—and for being all white.

The name of the march was changed to the March on Washington after critics complained the “Million Women March” was “appropriated” from the 1997 Million Woman March.

The 1997 Million Woman March was held in Philadelphia, and brought together some 750,000 African-American women seeking to shed light on issues plaguing black women and their families.

The founders brought in new leadership to reflect the same diversity they were trying to promote. Now, four women are leading the march—a white American, a black American, a Mexican-American, and a Muslim-American.

So proud to be a co-chair of the Women’s March on Washington with my old friends @msladyjustice1 & @lsarsour and my new friend, one of the March creators, @bobblanddesign. #womensmarch

The co-chairs have since publicly acknowledged the controversy surrounding the march’s beginnings, and are calling on white participants to “understand their privilege.”

“The reality is that the women who initially started organizing were almost all white,” reads the group’s Facebook page. “It is important to all of us that the white women who are engaged in this effort understand their privilege, and acknowledge the struggle that women of color face.”

Mallory made clear the march was not intended to protest Trump’s inauguration, but rather, send a message to the new administration that “women’s rights are human rights.” The goal, she said, is unity.

The rhetoric of the past election cycle has insulted, demonized, and threatened many of us … The Women’s March on Washington will send a bold message to our new administration on their first day in office, and to the world that women’s rights are human rights. We stand together, recognizing that defending the most marginalized among us is defending all of us.

On Jan. 21, when attendees gather near the Capitol to take a stand, it’s unclear exactly what policies they’ll be marching for. Thus far, the co-chairs have not released an official policy platform or list of demands.

“We, as women, need to ensure that our rights are protected and that our voices are in fact heard. Yes, that is very vague, and there needs to be and will be a group of policy experts who are working to help us find ways to express the sentiments to the degree that we can as women in general and the things at this moment are affecting us,” Mallory said.

Already, that process is underway. Mallory said the co-chairs have tapped coalition partners to help them develop a platform. She would not disclose the groups they are working with, but if it’s any sign, most of the march’s co-chairs are heavily involved with the Black Lives Matter movement.

The presenting sponsor for the Women’s March on Washington is a group called the Gathering, a nonprofit that works to “end child incarceration while working to eliminate the racial inequities in the criminal justice system that enliven mass incarceration.”

The Gathering for Justice is an umbrella organization that includes Justice League NYC, which was formed following the nonindictment of Officer Daniel Pantaleo in the death of Eric Garner. Three of the four co-chairs have close connections to these groups, as well as Black Lives Matter.

Carmen Perez is the executive director of the Gathering for Justice and co-founder of the Justice League NYC. Linda Sarsour, who is the executive director of the Arab American Association of New York, is “deeply involved in the Black Lives Matter movement, and helped organizing a march in April led by Justice League NYC,” according to The New York Times.

It’s not easy…blending ideas, personalities and issues. It’s not easy working with several people you’ve never met to accomplish a monumental task. But when strong and determined women come together, ANYTHING is possible. It’s up to us to get this mess straight ladies! #womensmarch #mostoftheteam

The fourth co-chair, Bob Bland, was one of the original organizers of the march. She is the founder of Nasty Woman, a website that sells T-shirts and tote bags that read, “Nasty Woman” to benefit Hillary Clinton and Planned Parenthood. According to her Facebook, she is also the CEO and founder at Manufacture New York and creative director and designer at Brooklyn Royalty.

Close to 400,000 people have signaled an interest in attending the march on Facebook. The co-chairs are planning for a historic event, saying they hope to send a bold message to the incoming Republican administration.

“We are going to Washington under a feeling of despair, fear, concern, and also, [to continue] many movements that have existed even before us that still have not been able to realize all of the benefits,” Mallory said.