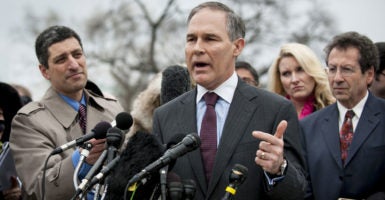 Pruitt is known for waging legal battles against the EPA over its climate change agenda, suggesting that Trump could intend to make good on his promise to “get rid of [the agency] in almost every form.”

Pruitt, a Republican, led the charge in the states’ fight against what he considers an overreach by the EPA on issues including the Clean Power Plan, which aims to combat global warming; the Waters of the United States rule, which aims to protect wetlands and waterways; and the Renewable Fuel Standard, which aims to reduce greenhouse gas emissions.

He has publicly expressed skepticism about climate change science, and supports the notion that the debate is “far from settled.”

The possibility of undoing a series of rules and regulations established under the Obama administration immediately caused alarm among green groups on the left.

“The mission of the EPA and its administrator requires an absolute commitment to safeguard public health and protect our air, land, water, and planet,” said Rhea Suh, president of the Natural Resources Defense Council. “If confirmed, Pruitt seems destined for the environmental hall of shame.”

“Having Scott Pruitt in charge of the U.S. Environmental Protection Agency is like putting an arsonist in charge of fighting fires,” added Michael Brune, executive director of the Sierra Club. “He is a climate science denier who, as attorney general for the state of Oklahoma, regularly conspired with the fossil fuel industry to attack EPA protections.”

“About time for sensible regulator again at such powerful agency,” Rove tweeted.

Pruitt has been criticized for having cozy relationships with energy companies. In 2014, The New York Times reported a letter he sent to the EPA was written “almost entirely” by Devon Energy, a natural gas and petroleum producer.

But in the face of criticism, Pruitt responded: “It should come as no surprise that I am working diligently with Oklahoma energy companies, the people of Oklahoma, and the majority of attorneys general to fight the unlawful overreach of the EPA and other federal agencies.”

Pruitt, who serves in one of the biggest oil and natural gas states in the country, has also been active in defending companies who express skepticism about climate change science.

In March, a group of state attorneys general formed a coalition to “criminally investigate energy companies for disputing the science behind global warming.”

Pruitt, along with Alabama Attorney General Luther Strange, came to the defense of the companies. In a statement, they voiced strong opposition to a coalition they said is an attempt to “use the law to silence voices with which we disagree.”

“Reasonable minds can disagree about the science behind global warming, and disagree they do,” Pruitt and Strange said in a statement. “This scientific and political debate is healthy, and it should be encouraged. It should not be silenced with threats of criminal prosecution by those who believe that their position is the only correct one and that all dissenting voices must therefore be intimidated and coerced into silence.”

Pruitt was elected as attorney general in Oklahoma in 2010, and before that served as a conservative in the Oklahoma state Senate.

In addition to prosecuting the EPA, Pruitt has challenged the Affordable Care Act and the Obama administration’s transgender bathroom guidance.