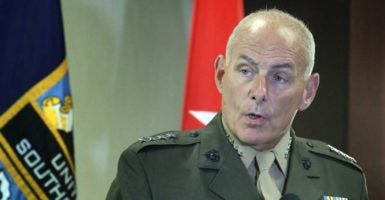 Gen. John F. Kelly has served for over 40 years in the military and recently retired from his role as commander of U.S. Southern Command. (Photo: Jose A. Iglesias/MCT/Newscom)

If nominated and confirmed, Kelly would join a Cabinet that already promises to be well represented by military figures.

“That would be the third general in the top echelon of the emerging Trump administration, indicating his preference for military experience, expertise, and accountability,” Major Garrett, chief White House correspondent for CBS News, said in discussing Trump’s choice of Kelly.

Kelly has served for over 40 years in the military and recently retired from his role as commander of U.S. Southern Command, or Southcom.

U.S. Southern Command, according to the Department of Defense, oversees “all Defense Department security cooperation in the 45 nations and territories of Central and South America and the Caribbean Sea, an area of 16 million square miles.”

In this role, Kelly acknowledged the widespread issue of drug trafficking and said he believes in continuing a partnership with Colombia to end drug trafficking, a debate he will likely have to revisit during confirmation hearings for the Department of Homeland Security job.

“Let’s not throw away a success story,” Kelly said during a Pentagon news conference in January, speaking about Colombia’s partnership with the U.S. in fighting drug trafficking, according to an article published by the Defense Department. “We have to stand and continue Plan Colombia, in my opinion, for another 10 years.”

Plan Colombia, established by Congress in 2000, is a cooperative alliance with Colombia that works to combat drugs, guerrilla violence, and social issues.

Kelly also says that he is devoted to fighting terrorism, and that attacks similar to 9/11 are likely to happen again.

“Given the opportunity to do another 9/11, our vicious enemy would do it today, tomorrow, and every day thereafter,” Kelly said in 2013 during a Memorial Day address, according to a tweet by a Washington Post reporter.

“I don’t know why they hate us, and frankly I don’t care, but they do hate us and are driven irrationally to our destruction,” Kelly said.

Kelly’s dedication to the military has not come without sacrifices, however.

Kelly’s son, Marine 1st Lt. Robert Michael Kelly, died after he stepped on a concealed bomb in Afghanistan in 2010, making the senior Kelly “the highest-ranking military officer to lose a son or daughter in Iraq or Afghanistan,” according to The New York Times.

During his son’s funeral, Kelly said that terrorism is “an enemy that is as savage as any that ever walked the earth,” the Los Angeles Times reported.

Kelly reaffirmed his commitment to fighting terrorism during a speech he gave in 2013 at the 5th Marine Regiment Operation Enduring Freedom Memorial dedication ceremony at Camp San Mateo Memorial Garden in Camp Pendleton, California. The memorial honors those who died while serving with 3rd Battalion and 5th Marines in Afghanistan, including Kelly’s son.

“Our nation is still at war, and I think will be for years, if not decades to come,” Kelly said. “It may be inconvenient to some, but I think it is reality. It is not in our power to end it but simply to fight it until our murderous enemy who hates us with visceral disgust for everything we stand for either gives up or we kill them.”