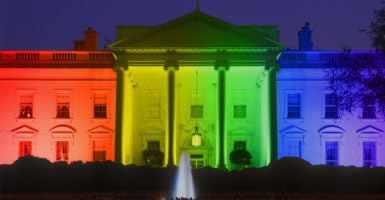 The LGBT community is united in fear, anxiety, and anguish over the outcome of the 2016 election, but is divided in strategy for how to best move forward in a President-elect Donald Trump world.

Speaking at an LGBT summit held in the District of Columbia last week, top groups from the movement came together to discuss how to grapple with the uphill battle they’re predicting ahead.

Some groups, like Freedom for All Americans, want to reach across the aisle and work with GOP members who might want to distance themselves from Trump.

“Our strategy is, we have to find a way to push Republicans,” said Kasey Suffredini, chief program officer for Freedom for All Americans. “There are fair-minded Republicans out there. We have to find them and give them what they need to support us.”

“I wonder,” Suffredini added, “in this climate, if there’s almost an opportunity to get more of them, because they want to distance themselves from this election cycle and the folks taking over the White House.”

Others, like the leader of Black Youth Project 100, wanted nothing to do with a party whose official platform calls for reversing the Supreme Court’s same-sex marriage decision, despite Trump saying on “60 Minutes” the issue is “settled.”

For a movement that just weeks ago was still in celebration mode over accomplishments it achieved during President Barack Obama’s tenure, the mood was somber. No one could predict what would come next.

One of the biggest issues that’s likely to be determined under the Trump administration is the question of where transgender individuals can—and should—use the bathroom. Before the election, many thought it looked like a winning battle. But now, the future is more uncertain.

Outside the event, “Unfinished Business: An Atlantic LGBTQ Summit,” signs separating restrooms by sex were crossed out to read, “Gender Neutral.”

Inside the event, the message was clear: The “bathroom fight,” to them, is about much more than “where people urinate.”

“I don’t like the [term] ‘bathroom bill,’” said Vanita Gupta, head of the Civil Rights Division at the U.S. Department of Justice. “The public will sometimes use that phrasing for shorthand but for me that phrasing trivializes what these bills are about across the country. They are fundamentally about people’s dignity.”

Gupta is at the center of the fight over where transgender students should use the restroom. On May 9, she, alongside U.S. Attorney General Loretta Lynch, announced a lawsuit against North Carolina’s House Bill 2.

The fate of House Bill 2, which mandates that public restrooms and locker rooms be separated by biological sex, remains in flux. Incumbent Republican Gov. Pat McCrory appears to have lost the governorship to his Democrat opponent, state Attorney General Roy Cooper.

Throughout his campaign, Cooper advocated in favor of repealing House Bill 2. Adding to that, the Supreme Court announced that it will take up the issue of Title IX and transgender students in the coming term, which will likely have implications for North Carolina and beyond.

Gavin Grimm, the public face of the Supreme Court case, called in during the LGBT summit.

In December 2014, the 17-year-old sued the Gloucester County School Board in Virginia for establishing a policy that mandates students use restrooms according to their biological sex.

Now, Grimm, who was born female but identifies as a male, goes to the nurse’s office to use the restroom.

“It’s almost shameful when I have to step into the nurse’s bathroom,” Grimm said.

Coming out, Grimm said, hasn’t been easy. Grimm said it’s not unusual to be called “young lady” or “ma’am” by adults, despite requesting otherwise.

The Gloucester County School Board maintains that Title IX, the federal statute that bans discrimination in education based on sex, allows schools to keep restrooms and locker rooms separated by biological sex to protect student privacy.

“For decades, our nation’s schools have structured their facilities and programs around the idea that in certain intimate settings, men and women may be separated ‘to afford members of each sex privacy from the other sex,'” the board’s Supreme Court petition read. “No one ever thought this was discriminatory or illegal.”

Grimm’s attorney, James Esseks of the American Civil Liberties Union, said he “obviously didn’t want the court to take the case,” given the lower court’s verdict in their favor.

“But we think the position that we’re taking, and that Grimm’s taking, is right,” he said.

With Trump’s ability to appoint a new Supreme Court justice to replace the conservative Justice Antonin Scalia, Esseks expressed even more uncertainty about the outcome of the case. But even so, he said “it’s not possible” to anticipate how any of the justices are going to vote.

After all, they still won the Supreme Court gay marriage case with Scalia, he pointed out.

But in the chance they lose, Esseks stressed, “This is a moment.”

“We have the country paying attention to this issue in a way it didn’t before, and that’s just as important than all the lawyering that takes place.”

But while the world is watching the bathroom battle play out, some LGBT insiders are wondering whether it was the movement’s narrow focus on stereotypical “LGBT issues,” such as bathrooms, that cost them the election.

“We need to be able to be queer and trans, and show up in foreign policy, show up in immigration, show up in racial justice, and so far, we’ve just been extremely segmented,” said Ailith with Black Youth Project 100.

The segmentation of the LGBT coalition was a recurring theme of the LGBT summit. Nathaniel Frank, director of Columbia Law School’s What We Know Project, stressed, “This is the moment to understand what solidarity means.”

The 2016 presidential election, Frank said, should serve as a “wake-up call” for the LGBT population, and how vulnerable they still are.

Frank said Trump, Rudy Giuliani, Newt Gingrich, and others like them are attempting to “explicitly divide what they call the far left from other liberals.”

“We can’t let them do that,” Frank pleaded.

The differences in strategies among the LGBT coalition—questions about whether to compromise with Republicans on anti-discrimination legislation, or what types of transgender folks to bring forth to the American public—might not be visible to the casual outside observer, but appear to be stressing the coalition’s unity.

“The idea that the only way to go is the approach of the Human Rights Campaign and anyone else is radical and doesn’t understand … I don’t think that will work. I think we need all of these approaches,” said Hayden Mora, founder and principal of the Parallax Group.

Suffredini, who supports working with GOP members despite some groups thinking otherwise, said, “I think we need all the strategies, I don’t think it’s an either or,” adding:

Our position at Freedom for All is, this is our position, this is our role to play, but everybody has their part to play and I think all those strategies are really necessary.

Velasquez, of Consult Catalina, agreed that it’s time to let go of differences in favor of a unified approach that values the same diversity the LGBT movement claims to defend.

“It is an integrated approach,” Velasquez said. “We need the outside strategy, we need the inside strategy. There’s no right answer.”

And as Grimm put it, the rest is out of their hands.

“There really is no way of knowing exactly what’s in store for us in the next four years,” Grimm said. “Me personally, I’m just hoping for the sake of this nation and the sake of this movement, I’m hoping it’s a positive four years.”