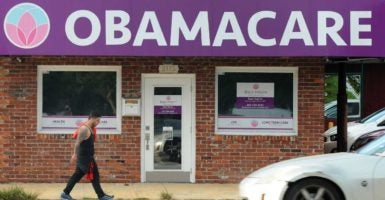 Before Obamacare insurance exchanges were established in 2013, Florida had 18 insurers operating in the state. President Barack Obama arrives in Miami Thursday to promote his signature legislative achievement, as Florida will have just five companies for Florida residents to choose from in 2017.

The Affordable Care Act was sold in part as a means to lower prices and increase competition, but in numerous states, including Florida, the law has done neither.

Obama will deliver remarks about Obamacare at Miami Dade College in Miami regarding “the progress made in ensuring that all Americans have access to quality, affordable health care.”

In 2016, the Sunshine State had seven insurers, a plunge from 18 pre-Obamacare, according to data compiled by The Heritage Foundation.

“Promise after promise of the [Obamacare] program turned out to be not true,” @LaurenSchenone says.

However, UnitedHealthcare and Aetna announced they would be exiting Florida’s health care exchanges in 2017, leaving Floridians with just five insurers.

Also, Florida was one of 41 states to see an increase in Obamacare deductibles in 2016. On average, Florida deductibles increased $990, or about a 23 percent increase from the previous year, according to Freedom Partners, a conservative advocacy group.

Florida Gov. Rick Scott’s office contends the law is not helping the state.

“The governor has continued to say that Obamacare is not the answer to improving our health care system when promise after promise of the program turned out to be not true,” Scott’s press secretary Lauren Schenone told The Daily Signal. “Gov. Scott is proud we have made historic Medicaid reforms in Florida that have made our system more accessible and affordable to low-income people who need access to high-quality medical care.”

Scott, a Republican, is taking action at the state level to try to keep medical costs down, Schenone said.

Obama’s planned Florida speech comes just one day after the Department of Health and Human Services released a report projecting 13.8 million people will sign up for coverage on the marketplace during the upcoming open enrollment for 2017. That would be a 1.1 million increase from the previous year, roughly the same growth as 2016.

“We’re confident that millions of Americans will choose to enroll when they learn that quality, affordable health insurance is within reach,” Secretary of Health and Human Services Sylvia Burwell said in remarks Wednesday.
Though, the secretary admitted some improvements would be needed.

“We’ve put our ideas on the table to build on the historic progress achieved under the ACA and continue to improve America’s health care system,” Burwell said. “We need partners. And we are hopeful that soon, we’ll see bipartisan collaboration in Congress and the states that will help us make improvements to the law.”

Companies are exiting Obamacare because of the cost of insuring the sick and lower income without enough young and healthy people, said Ed Haislmaier, a senior research fellow for health policy studies at The Heritage Foundation.

“Florida seems to skew somewhat heavier to lower-income enrollees, more than most states based on the share of people getting subsidies is higher than other states,” Haislmaier told The Daily Signal.

Based on 2015 numbers, the most recent available, 92 percent of Obamacare enrollees in Florida are getting tax subsidies, while the national average is 84 percent of enrollees.

“We don’t know how many had insurance before. The question is, will the plan insure anyone else going forward,” Haislmaier said. “The [Affordable Care Act] relies on healthier people signing up. A lot of the people they want to reach wouldn’t get subsidies, and it makes it difficult to expand beyond the program already in place.”

The costs will likely continue to rise, but at this point, it’s something the 115th Congress will have to deal with, Haislmaier said.

“It matters more to the next Congress. I don’t see either of the presidential candidates taking the lead,” Haislmaier said. “Basically, it’s not quite at the crisis stage yet, but as the individual exchanges hit higher premiums, Congress responds to a crisis. Something will come out of Congress and it will be bipartisan, that’s the only way it will pass and the next administration will support it.”