Fighting the Good Fight Against Corruption in Nigeria 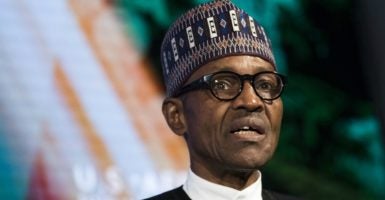 Job creation has been impeded in Nigeria by bureaucratic rigidity and corruption in the economy, causing increased frustration among underemployed youth.. Pictured is President of Nigeria Muhammadu Buhari. (Photo: Drew Angerer/ZUMA Press/Newscom)

The Heritage Foundation was on the road in West Africa carrying the message of economic freedom. One of our stops was Lagos, Nigeria. Lagos is the largest city in Africa (its metro area population exceeds 20 million) and Nigeria has the largest population (by some estimates nearly 180 million) among the 54 countries on that continent.  It’s a big country any way you look at it.

Oil-rich Nigeria also has a really big problem with corruption.

The Heritage Foundation’s 2016 Index of Economic Freedom reports that job creation has been impeded in Nigeria by bureaucratic rigidity and corruption in the economy, causing increased frustration among underemployed youth. The government continues to investigate the state-owned Nigerian National Petroleum Corporation after allegations that more than $20 billion in oil revenue has just “disappeared” in recent years.  But with the judicial system susceptible to political interference, the rule of law is weak.

Another source of corruption has risen as the Nigerian currency, the Naira, has devalued in the wake of ongoing low oil world prices. In response, the Nigerian government has steeply ramped up protectionism, both to try to conserve its reserves of foreign exchange and to force companies to produce products they sell in Nigeria instead of importing them.

The long list of protected items, including rice, palm oil, and tomatoes, has spurred more smuggling and opened up whole new areas of the economy to potential corruption and bribery when private companies go to government officials to seek exceptions.

But there is good news coming out of Nigeria, too.

The good news is that there are several citizen action groups in Nigeria, often started by the younger generation, that are fighting back against corruption.

One of them is the Initiative for Public Policy Analysis. Another one is a non-governmental organization called “BudgIT,” which celebrated the 5th anniversary of its founding this month.

Taking a cue from the Center for Data Analysis at The Heritage Foundation, which conducts independent analysis of the U.S. federal budget, BudgIT’s analysts take publicly-available accounting data published by the Nigerian government and scrutinize it for inconsistencies. Their  TRACKA online tool provides a vital window for Nigerians on their government’s operations, and BudgIT analysts have discovered that vast amounts of spending by the Nigerian government either cannot be accounted for or has been wasted on shoddy work.

Other leaders in the fight against corruption in Nigeria include Mrs. Obiageli Ezekwesili, a co-founder of Transparency International, a former minister with several portfolios in the Nigerian government, and the vice president of the World Bank’s Africa division from 2007 to 2012.

Another leader pushing to free his Nigerians from oppressively cronyist government is professor Pat Utomi, founder of a think tank in Lagos called the Centre for Values in Leadership.  Utomi is well-known among many U.S. conservatives as an ally for economic freedom.

With our presentations in Lagos of the Index of Economic Freedom, we are proud to have joined our voice with these  brave “little platoons” who are fighting the good fight against corruption and cronyism in Nigeria.