What’s Behind the French Burkini Ban 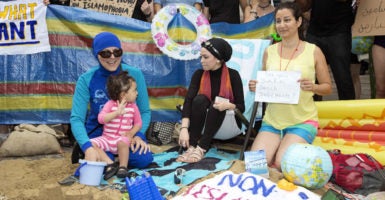 Women stage a burkini protest on Aug. 25, 2016, outside the French Embassy in London. (Photo: SOLO/Zuma Press/Newscom)

France’s ban of the so-called “burkini,” a swimsuit that covers the women’s whole body except for her face, has made headlines around the world for its infringement on the ability of Muslim women to practice their faith in the public space.

It’s an issue that has liberals and conservatives here in the United States generally united—a rarity in today’s politics. A “burkini ban” couldn’t happen in the U.S., most people think.

But experts are issuing a word of caution, telling The Daily Signal, “It’s always important to be careful about our freedoms.”

“Understand if this can happen elsewhere, we have to be able to protect against it here,” said Asma T. Uddin, director of strategy at the Center for Islam and Religious Freedom in the District of Columbia.

So how exactly did France come to ban a “burkini” that in itself, seems innocuous?

“France does not believe in multiculturalism,” said Mike Gonzalez, a senior fellow at the Center for International Studies at The Heritage Foundation.

The French Revolution introduced a strong anti-religious animus that over time, he said, has kept religion from the public space. This trend is reflected in France’s concept of laïcité, which has been used to defend bans such as those targeting the burkini.

According to The Economist, laïcité is “a strict form of secularism enshrined by law in 1905 after a struggle against authoritarian Catholicism,” meant to keep “religion out of public life.”

French officials view bans on religious garb such as burkinis as a way to protect their secular values—which Gonzalez said are in themselves often promoted officially as a part of the country’s identity and culture.

The problem, Gonzalez said, is that “secularism is a void. It’s not a thing itself.”

“It’s not a belief, it’s the anti-belief,” he added. “This is why I think sometimes its efforts at assimilating can’t get traction because it’s very hard to get people to latch onto something that is basically a void.”

France’s burkini ban doesn’t apply nationwide, but it affected some 30 towns. The policy, which would be like prohibiting a nun from wearing her tunic to the beach, was just overturned last week by the country’s administrative high court. In the ruling, the court said the ban violated “fundamental freedoms” such as the “freedom to come and go, the freedom of conscience and personal liberty.”

Experts believe the ruling sets a precedent in towns that have imposed burkini bans, but even after the ruling some mayors said their city’s burkini ban would remain in effect.

The problem some saw with the girls’ demands, Berman wrote, is this:

The veil is a proselytizing device, intended to intimidate the Muslim schoolgirls and to claim a zone of Islamist power within the school. And the dress code is the beginning of something larger, which is the Islamist campaign to impose a dangerous new political program on the public school curriculum in France.

From there, the country changed course, banning religious symbols and clothing from being worn in public schools in 2004. In 2011, the French parliament extended the ban to apply to all face-covering headgear in public places, arguing that hijabs could be both a national security and a social hindrance.

In 2014, the European Court of Human Rights, which is Europe’s leading human rights court, upheld the ban on face-covering gear in public, solidifying the argument that the policy poses no violation on the human rights of Muslim women.

In that lawsuit, the French government argued the ban “pursued two legitimate aims: Public safety and ‘respect for the minimum set of values of an open and democratic society.’”

“The fact is that many in France consider the aggressive display of this brand of Islamic fundamentalism in a public space to be a provocation, an intentional rejection of the French Republic’s long tradition of secularism, and an attempt at self-exclusion from the rest of the population,” wrote Benjamin Haddad, a research fellow at Hudson Institute. Haddad continued:

And while the vast majority of French Muslims keep their faith privately and are peaceful citizens, this model of integration makes the country an inviting target for those who don’t. Furthermore, France, as host to the largest Muslim community in Europe (proportionally about 10 times larger than that in the United States) has become the preferred battleground of extremists.

While the concept sounds foreign to observers in the United States, Uddin said it “actually works really well over there.”

“A lot of Americans might think that this type of rationale is completely ludicrous, but in fact the highest human rights court in Europe has actually upheld that sort of rationale,” Uddin told The Daily Signal during a phone interview. “The same type of thing that here, seems so ridiculous, actually works really well over there.”

For that reason, Uddin added, Americans should be wary of what could come next. In light of the country’s administrative high court overturning the ban, Uddin said some French politicians called to make it a national law so the burkini would be forbidden in all of France.

“Their solution was to make it worse—that’s the rhetoric we’re hearing,” she said. “So given their history, I wouldn’t be surprised if it actually happened.”

The Future for Religious Freedom in France

The policy has caused grave concern for religious freedom advocates here in the U.S.

“When women are pressured to go to the beach with 90 percent of their body exposed, but can be fined or arrested if their body is 90 percent covered, standards of modesty and propriety haven’t just eroded, they’ve inverted,” said Roger Severino, director of the DeVos Center for Religion and Civil Society at The Heritage Foundation.

“France’s burkini ban is an affront to freedom on several levels but hits religious freedom in particular because the ban is so clearly targeted at Islam. It seems that after centuries of hostility to anything visibly Catholic, France’s state-imposed secularism has found a new adversary in Islamic dress.”

Laurence Wilkinson, legal counsel for Alliance Defending Freedom International, a Christian legal nonprofit based in Strasbourg, France, warned the situation in France is “part of a growing trend towards restrictions on religious liberty in Europe.”

“Governments are rightly concerned about the threat of terrorism and Islamic extremism, but in many instances governments are responding to this threat with ill-thought through and far-reaching restrictions that should concern people of all faiths and none,” he said.

In the last two years, France faced three major Islamist terrorist attacks. While many contributing factors led to these attacks, Uddin said the burkini ban and others like it “is one piece of a pretty complicated puzzle.”