Judges Put Election Reforms in Wisconsin on Hold, Except for Voter ID 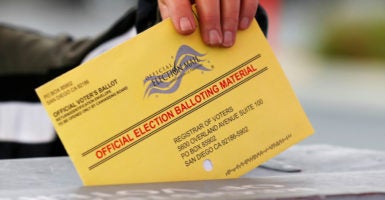 Wisconsin's voter ID law will remain in place for the November election because a district court judge stayed his earlier ruling against the law on Aug. 11. (Photo: Mike Blake /Reuters/Newscom)

On Monday, a three-judge panel of the 7th U.S. Circuit Court of Appeals refused without comment to stay a Wisconsin district court opinion in One Wisconsin Institute v. Thomsen that threw out changes the state legislature had made in early voting rules as well as other changes such as the residency requirement for new voters.

However, the state’s voter ID law will remain in place for the November election because the district court judge, James D. Peterson, a President Barack Obama appointee, stayed his earlier ruling against the ID law on Aug. 11.

Peterson didn’t have much choice on that issue: The same three-judge panel that refused to stay his overall ruling had issued a stay on the voter ID issue on Aug. 10 in a second district court case in Wisconsin, Frank v. Walker.

In that case, another federal judge, Lynn Adelman, a Bill Clinton appointee and former Democratic state senator, required the state to allow anyone who signed a form stating they could not obtain an ID to vote—despite the fact that Adelman admitted “most voters in Wisconsin either possess qualifying ID or can easily obtain one.”

The 7th Circuit disagreed with that decision, pointing out that Adelman’s mandate would allow anyone to vote “even if the voter has never tried to secure [an ID], and even if by objective standards the effort needed would be reasonable (and would succeed).” And it criticized Adelman for telling state officials they were “forbidden to dispute or question any reason the registered voter gives” for not obtaining an ID.

Unfortunately, Peterson’s other rulings in his July 29 order will remain in effect, despite the fact that there is no legal basis for them.

For example, he declared that the legislature’s changing the number of voting days to 12 from 30, as well as limiting the early voting locations to only one per county, was unconstitutional under the First and 14th Amendments.

Early voting is not a constitutional requirement. In fact, it is a relatively new phenomena: Texas was the first state to implement early voting in 1988, and there are still about a dozen states like New York that don’t have early voting at all.

The Supreme Court said in 1969 in McDonald v. Board of Election Commissioners that there is no constitutional right to absentee ballots. In fact, having 12 days of early voting would still put Wisconsin close to the median of 14 days of early voting of those states that allow it. Peterson’s ruling would mean that any state that has not implemented early voting is suddenly violating the Constitution, a legal conclusion that makes no sense.

These cases simply illustrate how important that empty seat is on the U.S. Supreme Court.

Peterson also barred the state from changing its residency requirement for voting from 10 days to 28 days, finding that it was a violation of the First and 14th Amendments. He did this despite clear Supreme Court precedent, Dunn v. Blumstein (1972), finding that a 30-day requirement was acceptable. In essence, Peterson thumbed his nose at both of these binding precedents.

Peterson also threw out the completely reasonable requirement that student IDs used to meet the voter ID requirement not be expired. Given that the percentage of out-of-state students at the University of Wisconsin in Madison is almost 35 percent, and given the high likelihood that many of them will be leaving the state as soon as they have graduated, not allowing voters to use expired student IDs makes perfect sense—except to Peterson.

“Perfectly reasonable” describes another change that Peterson threw out—requiring dorm resident lists that are submitted to election officials for voter registration purposes to indicate a student’s citizenship. The University of Wisconsin itself boasts that “over 4,000 international students from more than 130 countries chose to study” there, and the university is “consistently ranked among the top 20 universities in the United States with the largest number of international students.”

Yet a simple administrative rule easily complied with by the university, which will ensure that noncitizens do not illegally register and vote in Wisconsin elections, is such an undue burden that it is unconstitutional according to Peterson.

These cases simply illustrate how important that empty seat is on the U.S. Supreme Court. The six-member majority that upheld Indiana’s voter ID law as constitutional in 2008 is now two judges short: Justice John Paul Stevens retired and we lost Justice Antonin Scalia, to our great misfortune.

Getting a new justice on the court who will sustain that precedent and overrule these types of bad decisions from federal judges like Adelman and Peterson when the cases get to the high court is crucial to maintaining and improving the security and integrity of our elections, as well as ensuring that states retain their control of the election process as delegated to them in the Constitution.