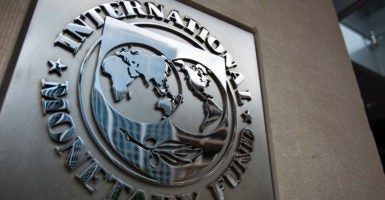 The International Monetary Fund recently downgraded its prediction of global economic growth to just 3.2 percent this year, down from roughly half from a decade ago. (Photo: Jim Lo Scalzo /EPA/Newscom)

In the first six months of 2016, foreign central banks sold a net $192 billion of U.S. Treasury bills, notes, and bonds. This is more than double the pace from the same time last year. China, Japan, and Brazil were the leaders in selling U.S. debt.

With the U.S. debt running at approximately $19.4 trillion, this could be problematic. A large selloff of U.S. bonds would decrease their price, or in other worlds, increase domestic interest rates in general (bond prices and interest rates always move in the opposite direction).

With the debt roughly the size of the U.S. economy, interest spending on the debt is forecasted to be the fastest growing area of federal spending in the coming years, eclipsing Medicare and Social Security. In 2015, the U.S. spent $223 billion, or 6 percent of the federal budget, despite historically low interest rates.

The question is, why is this happening? The International Monetary Fund recently downgraded its prediction of global economic growth to just 3.2 percent this year, down from roughly half from a decade ago.

During times of periods of distress, U.S. Treasurys, the most liquid and safe securities in the entire world, are typically the most attractive in times of economic turbulence. Currently, China is the largest holder of U.S government debt, standing at $1.24 trillion in June, while Japan comes in at a close second with $1.148 trillion.

Be rest assured the world is not really “dumping” U.S. Treasurys as some say. The evidence is in the yield of maturity on 10-year and 30-year bonds. As of Aug. 17, the interest rates on both securities were 1.57 and 2.29 percent, respectively. This means the federal government is able to borrow money at 2.3 percent for a 30-year period. Historically, this is unpresented.

While there has been an increased level of selling by foreign banks, the primary reason is to support their depreciating currencies and shore up federal balance sheets in difficult times.

But with $80 trillion in unfunded liabilities, the U.S. has only so much time before there is lost confidence in U.S. Treasurys. That day may arrive sooner than the markets believe.